About 5,000 people gathered to call for greater access to abortion services 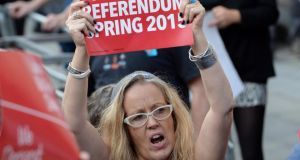 The March for Choice crossed tthe Rosie Hackett Bridge in Dublin today on its way to the Dail. Photograph: Eric Luke / The Irish Times 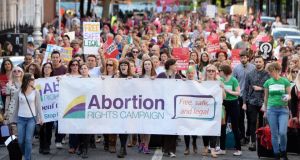 A large crowd gathered for the March for Choice from the Garden of Remembrance to the Dail in Dublin today. Photograph: Eric Luke / The Irish Times 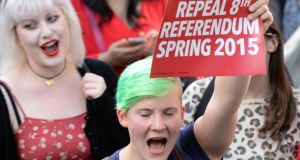 Demonstrators carried banners calling for a referendum to be held early next year. Photograph: Eric Luke / The Irish Times

About 5,000 people marched in Dublin today calling for greater access to abortion services.

They heard of plans from Independent TD Clare Daly to table legislation later this year which would provide for a referendum on repealing Article 40.3.3 from the Constitution. The Article guarantees to protect the right to life of both the mother and the unborn as far is practicable, and has guaranteed Ireland has one of the most restrictive abortion regimes in the world.

Those taking part in the third annual March for Choice carried placards with such slogans as “Pregnant with Rage”, “Girls just wanna have fundamental human rights”, “I’m a woman, not a womb”, “Repeal the Eighth”, “Ulster says ‘No’ to stigma”, and “Get your rosaries off my ovaries”.

There were drummers and musicians as marchers chanted: “Not the Church, not the State, women must decide their fate.”

The marchers were predominantly young, mostly under 35, and had comes from across the island, with banners visible from Galway, Derry, Limerick, Cork and Kerry, and from trade unions including Unite, Mandate, the Teachers Union of Ireland, and the National Union of Journalists.

There were also a number of public representatives, including TDs Mick Wallace, Catherine Murphy, Joan Collins and Richard Boyd Barrett.

Cathie Doherty of the Abortion Rights Campaign addressed the crowd at Leinster House, saying no-one under the age of 48 had had a chance to vote in the 1983 referendum which resulted in the insertion of Article 40.3.3 into the Constitution, as the eighth amendment.

“There is an appetite in Ireland for real change, contrary to the statement from the Minister for Health and the Taoiseach. We need to end the hypocrisy of travel and the hypocrisy which forces women who cannot travel to carry pregnancies or to break the law by importing the abortion pill.

“We can change Ireland. We can have a society which treats us as the valuable human beings that we are,” said Ms Doherty.

Clare Daly said she and her parliamentary colleagues Mick Wallace and Joan Collins planned to able legislation in “December or January” during private members’ time, which would provide for a referendum on repealing the eighth amendment, and so “force the issue onto the floor of the Dail”.

She said that since the last March for Choice Ireland’s abortion regime had “claimed another victim”.

Referring to Ms Y, a young asylum seeker raped in her own country whose infant was delivered by Caesarean section last month at 26 weeks’ gestation after she was denied an abortion here, Ms Daly said Ms Y had come to Ireland as a place of refuge, but “it was instead an escape to hell. Forced to carry a rapist’s child, this is beyond cruel”.

“We are part of a growing army which refuses to be silenced any longer,” she said. “It is not good enough to shed crocodile tears about the Magdalene laundries and the mother and baby homes and then replace them with a Ryanair ticket or an abortion pill over the internet.

“This is not the Ireland of 1983. The days of the Ballroom of Romance are long gone and the new world is very different place.”

The crowd was also addressed by Amel Yasef, chairwoman of Akidwa, a immigrant women’s support organisation. She said she was “so angry” and had been nervous her speech would “turn into the longest, loudest, angry scream”.

She described the “humiliation” and intrusion into migrant women’s privacy when they had to apply for exit and re-entry visas to travel for an abortion, having to disclose the reason they needed travel documents.

The crowd was also addressed by Dr Mark Murphy of Doctors for Choice, and Laura Harmon, president of the Union of Students in Ireland.