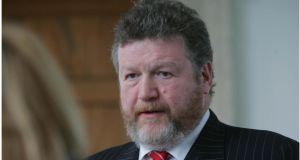 Minister for Health James Reilly said: “The finding that 35 per cent of the over-50s are obese, with a further 44 per cent overweight is another serious cause for concern”. Photograph: Bryan O’Brien/ The Irish Times

A major study of the over-50s in Ireland has found more than one third are obese, which is “strongly associated” with the onset of cardiovascular disease and “a significantly higher prevalence” of diabetes.

The findings were published yesterday as part of the second major report by the Irish Longitudinal Study on Ageing, which is a multi-institutional study led by Trinity College Dublin.

The national study of more than 8,000 people aged 50 and over in Ireland is based on data collected between April 2012 and January 2013 and shows how the lives of the over-50s in Ireland have changed over the period since they were last interviewed in 2009 and 2010.

The report also finds a further 44 per cent of over-50s are overweight. Obesity is “strongly associated” with heart disease and diabetes, which is three times more common in obese individuals.

The World Health Organisation’s waistline classification says 53 per cent of this population have a waistline measurement placing them at “substantially increased risk” of cardiac and metabolic disease.

While mortality rates from cardiovascular disease have decreased over the last number of decades, the “increasing prevalence of obesity and associated disease risk is in danger of reversing this trend”, according to the research.

Rates of cardiovascular disease among obese over-50s are nearly twice as high as rates among those of normal weight, while about one third of the over-50s report low levels of physical activity.

The research also found obesity increases the number of years people live with disabilities, while international findings indicate this will have “substantial social and economic costs” by increasing the care burden on the State.

Minister for Health Dr James Reilly said he was “struck” by some “worrying trends” in the study. “The finding that 35 per cent of the over-50s are obese, with a further 44 per cent overweight is another serious cause for concern,” he said.

“Our current national drive to combat childhood obesity is a very necessary one. These findings therefore, remind us that obesity is a lifelong issue and one that will require sustained and targeted interventions across all age groups and into the years ahead.”

The issue of “problematic alcohol use” has also increased from 12.2 per cent to 15.9 per cent over the four years of the study. This is more prevalent in men, rising from 17 per cent when the men were first interviewed to 22 per cent the second time. This is compared with a rise from 8 per cent to 11 per cent among women over the same period.

The percentage of the over-50s with a medical or GP visit card increased overall from 52 per cent to 57 per cent, but declined marginally in those aged 70 years and over.

While the number of individuals relying only on a GP visit card was small at first round of interviews, less than a third of these retained the card, the report said. Some 42 per cent of those who lost the GP card obtained a medical card while 27 per cent had no cover at all.