Love/hate: our special relationship with Britain

Opinion: Looking beyond the English/Irish stereotypes in advance of the State visit 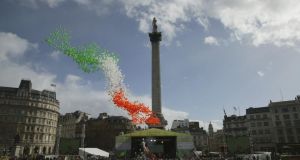 Balloons in the colours of the Irish flag are released over the crowds gathered to celebrate St Patrick’s Day in Trafalgar Square.

Collecting an Evening Standard theatre award in 1989, actor Richard Harris told a story that threw light on the truths, half-truths and caricatures that then sometimes marked Anglo-Irish relations.

Honoured with early success in Cannes for playing Frank Manchin in This Sporting Life , Harris told of spying a Standard billboard on his way back to London declaring, “British actor wins award”. Harris’s journey was only half-done, however, because a second round of celebrations remained ahead in Dublin – so he quickly headed on to Holyhead for another ferry.

Drink intervened. Harris got into a fight. On his return to London, the Evening Standard headline declared, “Irish actor gets arrested in drunken brawl”.

This week, there will be much talk of how relations between Britain and Ireland – a phrase better translated, perhaps, as England and Ireland – have never been better.

And it is true, all of it. But relations between ministers, officials, institutions, though hugely important, are not the full sum of nations. Too often, people’s knowledge of each other have not progressed at the same speed – not because of bile, but largely due to lack of interest.

On the English side, the relationship can be marked – though usually without malice – by benign condescension.

The Irish attitude contains a remembrance of history, with grudges held – against people who often have never learned what the grudge was about in the first place.

Politically, few British politicians can be taken much beyond the basic one-page information note they receive from the Foreign Office. Ireland is the UK’s fifth-largest export nation, buying more than India, China, Brazil; but that knowledge of Ireland’s significance rarely encourages a greater curiosity about the country itself.

Too often, relations between the English and the Irish suffer because each makes the mistake that the other is so close that they must be a known quantity.

The language is the same; so, too, is much of the food. Culturally, there are similarities aplenty. As a result, neither delves much into the soul of the other.


Perceptions held here of the English are formed second-hand from hearing loud, discordant voices that often poorly represent them. London is known; so, too, the homes of friends and relatives’ visited throughout Britain, or, for tens of thousands each week, Premier League grounds.

But most of us do not know the English – partly due to lack of interest, but also because no British tourist agency regards Ireland as a “target” market – even though it is on their doorstep. The lack of knowledge of the life of a Cornish fisherman, or a Sussex Downs farmer, or life in grittier towns and cities often leaves the Irish with a one-dimensional picture of our closest neighbour.

One Irish visitor to the Lake District during the 2012 Olympics recalled how his view of the British – which had never been negative, just painted in faint strokes – changed. He had spent the evening in a crowded pub, listening to locals “raising the roof” as they watched a Somali immigrant, Mo Farah, win his second gold medal. “And I thought, ‘What a bloody fine country they are’,” he recalled later, admitting that the generosity displayed had come as a surprise.

Because it is clear that with knowledge comes connection. Yes, the Irish can be more casual, more fun; yes, the English more reserved, crucifyingly so; but there is the possibility of communion, too.

Golden moment
On occasions, it shows itself. For those who were there, Katie Taylor’s Olympics gold medal win in the Excel is a memory that will remain undimmed. Much of the thunderous clamour – the loudest recorded at any sporting event – was not from the Irish. It came from British throats, which had earlier cheered their own boxer, Nicola Adams, on to her gold. Unprompted, how many Irish could now remember her name? In contrast,Taylor’s win was, and still is, lauded generously in Britain. So, too, was Brian O’Driscoll’s retirement.

The Daily Telegraph did momentarily tag Taylor as British, though that error was quickly corrected with good grace and humour by its then editor, Tony Gallagher – the son of Irish parents. For Irish business, particularly since the economic crisis, the British market has been crucial. And it is rare to hear any complain about the treatment they receive.

Indeed, most wish that business culture at home would match it. If anything, British business – bar, perhaps, retailing where they are already dominant – has a harder time of it in Ireland. Sometimes an English businessman fronting an Irish operation has found that his accent – posh or otherwise – gets in the way. The classic example is of Andy Pyle of Shell when he led the Corrib gas project, one which had been controversial long before he ever arrived. Undoubtedly, any executive would have struggled, but Pyle’s message was deemed particularly unwelcome because of the accent in which it was wrapped.

Deeply-embedded biases dominated. Look at the way the word “Éire” grates on Irish ears when said with an English accent, even if it is an official name of the country. “One British businessman recently talked about going to ‘Éire’. I had to take him aside quietly and tell him that that wouldn’t work,” one source commented dryly.

The coming days offer an opportunity to build on relations. Much has been achieved. The official will on both sides to do more is there, too. But people must talk to people. The view held by some in Ireland that all is well with Anglo-Irish relations because Queen Elizabeth II is a remarkable woman is not sufficient foundation for the future. It is not that relations will descend back into the darker ages of the past. Rather, the concern is that an opportunity – one unmatched for centuries – will not be exploited to the full.

1 Gardaí cannot prosecute people who breach midlands movement restrictions
2 Covid-19: One more death and 174 further cases confirmed in State
3 Midlands lockdown Q&A: Firstly, is it a lockdown or not?
4 Garda checkpoints in Kildare, Laois and Offaly as restrictions come into force
5 Midlands lockdown: ‘Why shut down Offaly and leave Dublin open?’
Real news has value SUBSCRIBE