Limerick asylum seekers’ centre ‘a jungle and a jail’

The Mount Trenchard direct provision centre in Limerick has been described by the Irish Refugee Council as “one of the worst in the system”. Video: Darragh Bambrick 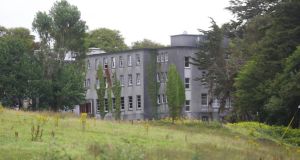 Mount Trenchard direct provision centre, Limerick: it is claimed it is “used as a centre of last resort” within the direct provision system, while it has been described by the Irish Refugee Council as “one of the worst in the system”. Photograph: Brian Gavin/Press 22

An organisation working to support the rights of migrants in the midwest has called for a centre housing asylum seekers in Limerick to be closed down, describing it as a place where some men are sent as “punishment”.

Karen McHugh, chief executive of Dorais Luimní, said the Mount Trenchard direct provision centre was “used as a centre of last resort” within the direct provision system. The centre has been described by the Irish Refugee Council as “one of the worst in the system”.

The Irish Times has been given video footage of conditions in the centre which shows cramped sleeping conditions and beds separated by curtains.

There are six to eight beds in some rooms. One piece of footage shows several windows smashed after one resident lashed out at conditions there.

More than 4,000 asylum seekers live in the direct provision system, a form of temporary shelter set up 14 years ago in response to greater numbers seeking refugee status.

The average length of stay for asylum seekers in the system is almost four years. However, some residents in Mount Trenchard have been living in the direct provision system for a decade or more.

Four men living in the centre near Foynes have criticised conditions in the facility which has a capacity for 57 single males. According to the Department of Justice, there are 50 in residence there. Like all asylum seekers, they are given €19.10 a week while they await a decision. The average wait time is nearly four years.

Ousman Bah from Guinea said that “every day there is fighting, we are treated like animals”. He is 26 and has been in direct provision for 10 years. The food, he says, is often of very poor quality.

Abdel Ahmed Ali described the centre as “a jungle and a jail”. When he arrived in Ireland, he spent two months in Cloverhill Prison but this was “much worse”. The Libyan has been in the system for 14 years.

The men also talked about sharing rooms with six or more men from different cultures and religions who can be very antagonistic. “They mix the good people, the bad people, the sick people,” according to Bah.

The four included two men who had recently ended a hunger strike, Lema Olivier and Sahir Al Tamimi. They have been in direct provision for 14 years. Mr Olivier said the showers in the centre were often broken and feared this could lead to spread of infection.

The men were also fearful of the aggression within the building. Al Tamimi says he “feels fear of myself. You don’t know what anyone can do to you.”

They spoke at length about mental health issues within Mount Trenchard. They say there are a number of men suffering from mental health problems there. Some of these men talk to themselves, they don’t change their clothes “for months”.

One spends his nights sitting on the ground of the laundry room “pretending to eat and talk” with a woman in French. According to witnesses, these men had been relatively normal when they first arrived.

Spirasi, an organisation which provides support for victims of torture in the past, says 40 per cent of residents are among its clients, and they are not receiving adequate support in the centre.

Greg Straton, director of the organisation, says usually 10-15 per cent of residents of direct provision centres were previously victims of torture. These can be the more difficult cases for centres.

Recently a group of residents refused to allow staff to enter the building until the owner, Alan Hyde, agreed to meet them. The men wanted to make complaints about the conditions and management.

Mr Hyde and his business partner, Ted Murphy, are private contractors paid by the Reception and Integration Agency (RIA), part of the Department of Justice, to manage direct provision centres. In total, more than €900 million have been paid to contractors in Ireland since the direct provision system was introduced in 2000. Between 2000 and 2010, Mr Hyde and Mr Murphy were paid €9.9 million. They run four other centres, Glenvera, Birchwood, Clonakilty Lodge and Ashbourne House.

Mr Hyde came to meet the protesters and two representatives from Dorais Luimní, served as negotiators. According to one of them, Matt Cannon, the talks went well. Mr Cannon and his counterpart Okeremute Okeregha then spoke to another group of men who had begun a hunger strike the night before and left. Within half an hour of their departure, more trouble arose.

Transfer notices were served by fax for two of the residents’ spokesmen and a third man unconnected to the protests. One of the spokesmen, Ahmed Alhassin, said he was given “10 minutes to pack up his things” and was threatened with jail by armed gardaí. Mr Cannon says both men had been among the calmest and most articulate within the group.

Like all direct provision centres, Mount Trenchard is subject to three unannounced inspections a year. The inspections are carried out by the Reception and Integration Agency and a fire safety company hired by it called QTS. These reports are meant to be published online but there is just one currently available.

This, dating from December 2013, notes that the showers on the top floor were not working but says on indoor facilities/ communal rooms that “excellent facilities are provided” and that communal rooms are “all bright and clean”. It also says bedrooms are cleaned daily by staff. It refers to bedrooms being segmented by “privacy curtains” and says each has a wardrobe and sink, while the level of maintenance and cleanliness is described as “satisfactory”.

In response to queries from The Irish Times, the agency has stated that it is working with the owners of the centre in order to “address concerns raised by a number of residents there”.

It also said that all showers were working and that an RIA official had checked this in recent days. An official inspection had been carried out in March 2014 and this was due to be online no later than the end of September. There had been “delays” due to the “holiday period”.

The agency also confirmed it had transferred the residents mentioned earlier out of the centre and such decisions were made “in the light of information available to it” and “in the interests of residents of staff”. It did not accept any of the claims made by the men. It also denied that Mount Trenchard or any centre was being used as a place of punishment.

Overall, the said it was satisfied that “all accommodation was in compliance with the various statutory provisions”. It said asylum seekers were able to access mental health services on “the same basis as the general population in the area”.

Dorais Luimní has called on the Government to close the centre at once and for “truly independent inspections’ to take place. Ms McHugh says she fully supports the descriptions given by the men of the centre. She and representatives of Dorais Luimní visit Mount Trenchard weekly and she is “appalled by the conditions, especially the hygiene and the atmosphere. Men are deteriorating there.”

None of the men interviewed had faith in management or that any change was imminent. “When someone kills someone in that building, then they will talk about it,” Ousman Bah says.

Mr Hyde has not replied to repeated calls from The Irish Times. However, owners of direct provision centres are contractually obliged to direct all media queries to the RIA.