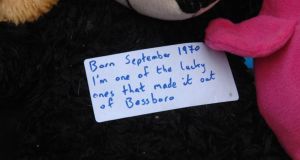 Two women who gave birth to children in mother and baby homes are seeking legal advice on bringing cases against the State, according to the Irish First Mothers group.

The women are both members of the organisation but will bring their cases in a personal capacity, according to the group’s press representative, Fintan Dunne, who said the cases centred on the women’s parental rights.

Mr Dunne said one of the women had already received legal advice from senior counsel and intended to pursue a case based on this advice.

He said legal advice had been sought in the case of a second woman.

Mr Dunne described the treatment of women and children in Ireland’s mother and baby homes as a “societal, cultural and institutional blind spot”.

“We trampled all over these women’s parental rights ... the State can now expect litigation that may very well proceed to trial.”

Members of the Irish First Mothers group were among those who attended an event in Tullamore, Co Offaly, yesterday arranged for individuals who had spent time in the homes.

This included birth mothers and those who were born in or transferred to the homes as children.

The event was organised by Mary Lawlor, who was born in 1960 in Seán Ross Abbey, Co Tipperary.

Ms Lawlor, who found out just two years ago that she had a younger brother, said: “I have spent a total of 11 days in total out of 54 years with my brother – that’s the sad reality”, but added that each person in attendance yesterday had their own story.

John Barrett from Wexford, who was born in 1952 in Cork’s Bessborough, said the forthcoming commission of investigation, the publication of the terms of reference for which has been postponed, needed to be wide-ranging and all inclusive.

“The Government wants to push us down a narrow corridor: I won’t co-operate with an investigation like that,” he said, adding that both the mothers and those who spent time in the homes as children needed to be consulted around the terms of the inquiry.

“This is our holocaust, and we have to deal with it. The Government can’t bury their heads in the sand any more.”

Yesterday the Irish Examiner published details of a 1943 report by the Cork county medical officer of health which recorded a 68 per cent infant death rate in the Bessborough mother and baby home in Cork.

Documents held by the Cork city and county archives state that: “Diagnosis in most of these cases was debility, some were given as gastroenteritis and a small number as prematurity”, and notes that “ the sister in charge of this home has no nursing qualification and no hospital training in infants and children apart from two months in Temple St Hospital, Dublin”.

Earlier this year it was revealed that 796 child deaths occurred in the children’s home in Tuam over a 36-year period.

A further 222 deaths had previously been documented in the Protestant-run Bethany Home.

Terri Harrison, an attendee at yesterday’s event who spent time in both Bessborough and St Patrick’s on the Navan Road, Dublin, in 1973 ahead of the birth of her son, said the revelations of recent months had been difficult.

However, she added that, on the other hand, “it is music to my ears that the truth is coming out finally”.