People hold a candlelight vigil outside the Dail, to pay respect to Jonathan Corrie, who was found yesterday morning just metres from the gates of the political establishment. 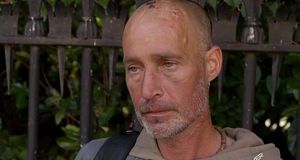 Jonathan Corrie, who died in a Dublin city-centre doorway, was a “quiet, well-mannered young man”, according to those who knew him as a teenager in Kilkenny

Jonathan Corrie (43), who died in a Dublin city-centre doorway, was a “quiet, well-mannered young man”, according to those who knew him as a teenager in Kilkenny.

There was no answer at Jonathan’s family home, a large house on the Castlecomer road on the outskirts of the city where he grew up with his older sister, Tanya, and parents Brian and Jean Corrie, who had adopted him when he was about 10 months old.

The house is just across the road from the prestigious Kilkenny College. It was here, with its long driveway in, past rugby pitches and gardens, where Jonathan went to school. It was fee-paying at the time and his father had been on its board of management.

“He had a good girlfriend in his late teens and she was very good to him, good for him. They had a daughter who would be 23 now I think, and he has a granddaughter who is three as far as I know. But they obviously didn’t stay together. I don’t know if he was still in contact with them. It’s a very tough time for them.”

He left home in his late teens and was before the courts on several occasions. In 2007, a judge ordered him to stay out of Carlow town after he apparently threatened to kill a former girlfriend. That court hearing took place at about the same time that his father, who had suffered for several years with Parkinson’s disease, died.

Among those who had contact with him more recently is Kyle Hughes, a PhD student, who spoke to him one night some weeks ago on Molesworth Street, close to the doorway where he died.

“I was on my way home from an evening out and I passed him and another man who was trying to convince him to come to a hostel with him. I stopped and it turned into a conversation,” said Mr Hughes. “He said he had been to hostels before and there was no way he was going. When I offered to give John money for a hostel, he flatly refused and told me I shouldn’t trust him with it – that it would only go towards him helping himself get through another day, and nothing more.

Members of the nightly rough sleeper outreach team were recently “increasingly worried” about him, says Mike Allen, director of advocacy with Focus Ireland, and had made a number of “assertive efforts” to engage with him.

“They had arranged beds for him in hostels but he had not turned up. He chose not to. At one point recently he had moved from his usual “patch” in Molesworth Street to Fleet Street, and moving patch can be a sign of things going wrong. They were actively looking for him.

“His death has been very distressing for the outreach workers. They had come to know him and were working hard for him, and had hope for him.”