Members of public, gardaí, scouts, boarders and coastguard among those averting tragedy 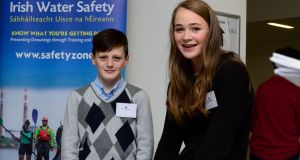 Justin Duggan with his sister Emily who rescued him from a hidden septic tank in Co Laois. Photograph: Cyril Byrne 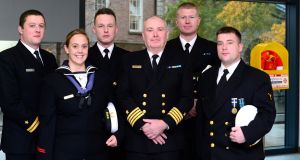 Alan Herdman paddled around the corner of a rocky outcrop and saw eight children slipping helplessly beneath rising waters. He couldn’t save them all.

It was a perfect summer’s day in July 2015 and the children, aged from eight to 12, had wandered off a nearby sandbank, not anticipating the rapidly flooding inflow of seawater that gives Rusheen Bay in Galway its name.

Mr Herdman, a 24-year-old student and water sports instructor, found them just as one of the young girls was sinking under the water.

Recalling the day’s events at the Irish Water Safety national awards on Tuesday, he said his immediate, sobering instinct was that he could not rescue all of the children.

Drowning incidents in Ireland are continuing to fall – dipping from an average of 207 a year in the 1980s, to 150 in the 2000s, to 133 today. But stories like that of Mr Herdman and his friend Neil Gibson (27) highlight the need for continued vigilance.

“It was a case of try and save as many kids as we possibly can. There was no point in being upset or panicking about it because it wasn’t going to help anyone,” recalled Mr Herdman, who was the first of the pair to the scene.

“Some [of the children were] in more difficultly than others. I started making my way toward one of the girls who was actually the furthest away in the group but she was the one in the most difficulty at the time. She was struggling to break the surface and get air.

“I knew this girl was the one who needed me first. Just before I got to her she went under the water and she wasn’t getting back up by herself.”

Mr Herdman managed to pull her to the surface and onto his paddleboard before turning to the others. Then Mr Gibson arrived and somehow they managed to save them all. If they hadn’t been there, they agreed, some of the children, oblivious to the dangerous currents they had stepped into, would have died.

In the last 10 years, 30 children aged 14 and under have perished in Irish water. These statistics would be worse if not for the training of lifeguards who saved 649 people last summer and reunited 662 children with their parents.

Davitt Walsh and Stephanie Knox, who rescued four-month-old Rionaghac-Ann McGrotty from a car that slipped off a pier in Buncrana, Co Donegal in March, killing five members of her family, were also recognised.

The afternoon celebrated Emily Duggan too who, an alert eight-year-old, had pulled her brother Justin (5) from a hidden, disused septic tank with the aid of a hurley not far from their grandmother’s home in Co Laois.

“He was just sinking really quickly. I came when he was half sunk and it was up to his neck,” she said.

Members of the public, gardaí, sea scouts, body boarders, coastguard and even people attending a hen party on Killiney beach were all recognised for averting tragedy in Ireland’s waterways.

Members of the naval service were also honoured for their ongoing efforts in the Mediterranean. Capt David Barry of operational command, said since May 2015 more than 14,000 migrants had been lifted from the water by those on Irish ships as part of a broader international humanitarian effort.

Many others have drowned. “Up to a certain point it’s a bit like combat,” he said. “Periods of very high, intense activity followed by a lull. That’s the pattern of life.”

Major traffic increase on roads around Dublin this week break 2019 records 16:14
Coronavirus: NPHET letter to Government warns of ‘extremely critical juncture’ for Dublin 16:03
Thousands of third level students in Dublin to have limited access to college campuses 15:57
Bobby Storey funeral: Police ask some mourners to interviews 15:23
Michael McDowell tells Seanad he has ‘no confidence’ in NPHET 15:06