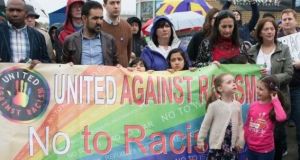 An anti-racism march in Rathfarnham in May. File photograph: Dave Meehan/The Irish Times

The last six months of 2015 saw the highest number of racist assaults recorded in Ireland, according to a new report.

New figures from the European Network Against Racism (Enar) Ireland iReport showed 25 assaults - including seven cases resulting in injury and a further 13 with a serious threat to harm or kill - were reported in the second half of 2015.

The numbers are the highest yet since the reporting system was set up to gather information from 40 civil organisations across the State in mid-2013.

One recent case in the report described how a pregnant woman was being harassed on an ongoing basis through racial slurs and verbal abuse by a neighbour.

It said the situation escalated when she was allegedly kicked in the stomach.

Another complaint explained how an Afghan boy was chased by two “Irish boys” who allegedly beat him with a hurley and iron bar.

This incident was reported to gardaí. The study concluded less than half of the incidents Enar classified as crimes had been so reported, however.

In total, Enar received 165 reports of racist incidents for July to December 2015, including racist public and sexual harassment, online abuse, discrimination in employment and service, and other attacks.

This brought the total of racist incidents reported to the organisation for the year to 313 - a reduction of 86 cases from the 399 reported in 2014.

“The general overall trend is one of an increase of more serious incidents. The main problem we face is under-reporting,” he said.

The report showed that, of the 37 serious offences reported in the second half of 2015, racist language was used in 30 of the incidents and 23 of the offences were committed by strangers.

Mr O’Curry said there was an urgent need for the Government to introduce hate crime legislation.

“It is appalling that we find ourselves yet again confirming in statistics what Africans, Travellers, Roma, Muslims, migrants and minority Irish already know - that racism is a fact of everyday life,” he said.

People of “black-African” background were involved in the highest number of reported cases at 37; the second highest group identified as south Asian, at 20, and “white-other European” were third highest at 18.

Also in the victim profiles were people with Chinese or east Asian backgrounds, who accounted for 10 cases. There were 11 cases involving Roma and nine among Travellers.

The report found the terror attacks on Paris particularly increased “fear levels” of Muslims in Ireland.

A Garda spokesman said anyone who had suffered a racist incident should come forward and report it to An Garda Síochána.

“If they do not inform us then we are not in a position to enforce the law,” he said.

“We appreciate this is not an easy thing to do and our ethnic liaison officers will visit anyone who has suffered racism or is a victim of a hate crime in plain clothes and will help them to make such a complaint.”

He said there was a dedicated Garda Racial Intercultural and Diversity Office (GRIDO) to work with minority communities, while a new “intuitive” part of the Modernisation and Renewal programme was going ahead this year.

It included house-to-house visits and community meetings with minority and hard-to-reach communities.

Dr Lucy Michael of Ulster University, the report author, said the number of assaults in the six-month period was “deplorable”.

“Given the number of academic and NGO reports on racism in Ireland over the last 20 years, it is outrageous that the State has still not developed any significant response to the problem,” she said.

“We see ongoing problems both with the recording of racist crimes by An Garda Síochána and communication with victims after reporting, as well as evidence of direct racist discrimination in a range of public services detailed in this report.”

Covid and Brexit could pose risk to medicines supply, says pharma sector 01:00
Teenage boy dies at Powerscourt Waterfall in Co Wicklow 23:15
Theft and drugs top list of offences dealt with by Probation Service 22:01
‘John Hume came out for us that often, Derry needed to come out for him’ 21:09
Dignitaries send tributes to Hume funeral from around the world 20:41