Ireland has fourth highest rate of teen suicide in Europe 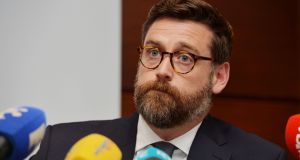 Ahead of World Suicide Prevention Day, Pieta House chief executive Brian Higgins said: ‘Our vision is of a world where suicide, self-harm and stigma have been replaced by hope, self-care and acceptance.’ Photograph: Alan Betson/The Irish Times.

Psychologists have called for great focus on measures to tackle the high rates of suicide among teenagers in Ireland.

The Psychological Society of Ireland (PSI), which has about 3,000 members, made the call ahead of World Suicide Prevention Day on Saturday.

Ireland has the fourth highest rate of suicide among teens in the EU, with only Lithuania, Estonia and Finland experiencing higher rates.

The society’s chief executive Terri Morrissey said putting a focus on preventative measures for teenagers and adolescents was important.

Ms Morrissey said depression and suicidal thoughts among teenagers were major health problems in Ireland but early intervention and the promotion of well-being and resilence could prevent such issues.

“Far too often we hear about such issues when it is already too late and we have to deal with the consequences and aftermath. Intervening at an early stage would have been effective,” she said.

“There is a range of methods and therapies that have been demonstrated to have been effective and which can be used to prevent behavioural, psychological and emotional problems.”

Ms Morrissey said these should begin at an early age, however.

“Well-being and resilience can be promoted through sport, exercise, healthy eating, parental support and other forms of physical, emotional and mental development,” she said.

Dr Gary Diamond, a clinical psychologist and international expert on teenage depression and suicide, will give a public talk on the subject on behalf of the society later this month. He is a professor and chair of the Department of Psychology at Ben-Gurion University in Israel.

“The goal of this parenting approach according to the author reduce family conflict, open lines of communication within families, help the adolescent make better sense of his or her own world and to better position parents to understand, support and advocate for their child,” Dr Diamond said.

Separately, the founder of the Suicide or Survive charity Caroline McGuigan said everyone had the responsibility to create the change that will ensure that there is a broad range of services and supports for people struggling with mental health and suicide.

“We’ve come a long way as a country when it comes to mental health but there is so much more we can do. We all have mental health just like we have dental and physical health and this needs to be recognised and mental health needs to be prioritised if we are to reduce the number of people who die by suicide in Ireland every year,” she said.

Brian Higgins of Pieta House, the centre for the prevention of suicide and self-harm, will return to Dublin on Friday night following a rickshaw tour of Ireland to raise awareness of the issue.

The tour took him to Wexford, Waterford, Cork, Tralee, Listowel, Limerick, Ennis, Galway, Tuam and Athlone. As it marks its 10th year, Pieta House has just opened its 10th centre (in Waterford).

“Our vision is of a world where suicide, self-harm and stigma have been replaced by hope, self-care and acceptance,” he said.

* Further information on the suicide charities is available at suicideorsurvive.ie and pieta.ie

Samaritans also provides support via samaritans.org or by phone from the Republic on 116 123