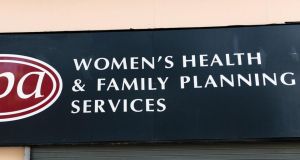 A Health Service Executive (HSE) health service for women engaged in prostitution refers “about 10 women a year” to the Irish Family Planning Association for advice on options about going abroad for abortions, its manager has said.

Linda Latham, who runs the women’s health project in Dublin, said the pregnancies were the result of unprotected sex with ‘clients’.

She said the majority of the women coming to the project, which was established in 1991, were under constant pressure to have unprotected sex with the men.

“There are pregnancies as a result and most will travel as soon as they can for terminations. They wouldn’t sense any connection with the pregnancy. We work with the Irish Family Planning Association and they will advise them and help them get visas if necessary.”

Ms Latham was speaking at a seminar on the health effects of prostitution hosted by the Irish Nurses and Midwives Organisation.

The women’s health project, which offers general health services as well as screenings for sexually transmitted infections, a needle exchange programme and free condoms, saw 268 women last year of whom 240 were non-nationals. The largest proportion came from Brazil, followed by Romania.

She said in her more than ten years working with women in prostitution she had never met any who wanted to stay in the ‘industry’. She said the health impacts were physical, social and psychological.

“I’d say the biggest impact is the psychological. Sadly we don’t have a psychological service in the service.”

She had made a case for one “almost every six months” and would like to offer a “dedicated trauma service staffed by a practitioner who has experience in sexual violence” but funding issues precluded it.

The seminar also heard concerns that legislation to criminalise the purchase of sex would not be enacted.

Denise Charlton, former chief executive of the Immigrant Council of Ireland, called on people not to become “complacent” about its anticipated enactment. She said the clock was “ticking”.

“While we have a cross-party commitment to produce this legislation it’s up to us to remind Government of the need to put the urgency back into the process.” The heads of the Criminal Law (Sexual Offences) Bill were approved by Cabinet in November. However, since then there appears to have been little progress towards the publication of a full Bill.

“Freedom of choice when applied to prostitution is an inaccurate and misleading term”. She said “the other side” often “slag us off, that this is a moral thing and that we are just anti-sex”.

The law would send a clear message about Irish society’s values, “that it’s not OK to purchase a woman or girl”.

“This is not about judging but about changing behaviour, changing attitudes and making a normative difference.”

Sheila Crowley, from Ruhama – an NGO who works with women in prostitution - said during the recession she had seen many Irish women who had exited prostitution return to it in an effort to make ends meet.