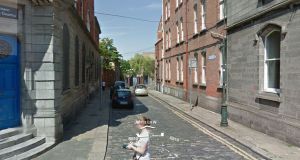 A group of homeless people have occupied a hostel on John’s Lane (above) in Dublin that is due to close on Monday night. File photograph: Google Street View

A number of homeless people have occupied a hostel in Dublin city centre that is due to close on Monday night to allow for the redevelopment of the site for 31 permanent homes.

Residents of the John’s Lane Hostel on John’s Lane, Dublin 8, began a protest at 8am on Monday and some have said they will not leave the building.

The 42-bed hostel is run and managed by Focus Ireland and the Peter McVerry Trust. It opened in the winter of 2014 as part of the crisis response to a sharp increase in rough sleeping at the time.

The hostel had been due to close at the start of May to accommodate development works for the 31 new permanent homes.

But following negotiations between Focus Ireland, which owns the building, the Peter McVerry Trust, which jointly manages it with Focus, and the Dublin Region Homeless Executive (DRHE), it was kept open until the end of June.

The DRHE gave assurances that alternative beds would be found.

Members of the Irish Housing Network (IHN), an umbrella group of 19 housing rights groups formed last month, were outside the premises on Monday.

The group said the 42 beds would be lost with immediate effect due to the closure of the hostel.

The group said it was “unacceptable” that the hostel was being closed without “any proper alternative accommodation being put in place”.

Residents had no other choice but to pursue this line of action, it added.

One resident, Rosemary Hughes, who has been at the hostel for three months, said no alternative accommodation had been arranged for her and her guide dog.

She said the John’s Lane hostel was suitable for her needs because it had ground floor access, and she knew the layout.

“I’m not going to be leaving,” she said.

In a statement, Focus Ireland said the hostel was ceasing operation as scheduled to allow the site to be redeveloped to provide 31 permanent homes for people who were currently homeless.

It said the “majority” of people using the service at John’s Lane on a night-by-night basis had been assisted to find “secured alternative placement”.

“The DRHE has previously arranged with other voluntary providers that 40 additional beds will be available in Dublin.”

Focus said 15 people who were using the accommodation last night refused to leave the premises this morning until they were informed of where they would be staying tonight.

“The staff in the premises have now confirmed alternative accommodation tonight for all of these people.”

Focus said a number of protesters from housing action groups who were not using the service had gathered outside the premises on Monday protesting at the closure of emergency accommodation, and some had entered the building.

“Some people using the service who have accommodation confirmed for tonight have also come back into the building. Focus Ireland staff are now working to resolve this situation with the customers and the outside protesters so that the development work on the building can progress as quickly as possible.”

Focus said the use of the building as emergency accommodation “was always understood by the DRHE and the voluntary sector partners as a short-term measure to make best use of the premises until the scheduled building work began”.

The planning permission required the new units to be completed by the end of 2017, it added.

“The start of July is the latest date for the redevelopment project to begin to ensure the much-needed homes are provided by the end of next year as required.”