‘No doubt’ the issue of homelessness among families a growing issue, says Minister 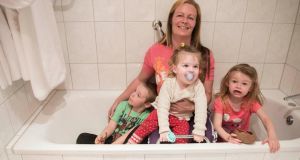 Sabrina McMahon with her children Karl (5), Chelsea (1) and Michaela (3) photographed in the bath of a hotel. A member of the public has booked her in to the hotel while she gets permanent accomodation. Photograph: Brenda Fitzsimons

A new and growing crisis of homelessness among families “is bloody awful and is going to get worse”, the deputy director of the Dublin Region Homeless Executive has warned.

Dr Dáithí Downey said the phenomenon of families with children presenting as homeless had “intensified” in the past six to eight months and while they were currently being accommodated in hotels, even this emergency option was now closing off.

He was speaking a day after The Irish Times reported that mother-of-three Sabrina McMahon had been sleeping in her car for the past week with her three young children as she had nowhere else to go. Ms McMahon said she had to sleep in the car with her son Karl (5), Michaela (3) and Chelsea (18 months) after a series of temporary housing arrangements had broken down. She was yesterday provided with hotel accommodation in the Tallaght area by a member of the public who wishes to remain anonymous.

Yesterday, a number of members of the public offered to pay for temporary accommodation for her, including one who arranged for the family to stay in a hotel in the Tallaght area for the next month. Ms McMahon said she was “overjoyed”.


Happy to help
“I have a smile on my face for the first time in months. I was sobbing on the phone when I spoke to that man and he said he was just happy to be able to help. I never believed there could be so many good people out there.

Last night Taoiseach Enda Kenny said he will look into the case next week.

Speaking in Castlebar, he said he realised there was a problem in terms of the housing situation. Minister for Housing Jan O’Sullivan was “working on” the problem, he said.

“Nama are making facilities available both in terms of land and houses. The Government will respond very shortly with a construction stimulus,” said Mr Kenny.

Up to 170 families in the Dublin area are now living in hotels as a combination of rapidly increasing rents, caps on rent-allowance and an unwillingness among many landlords to accept rent allowance is forcing an increasing number of low-income households out of the housing market.

Dr Downey and others working in the sector warn that as the tourism season picks up, hotel rooms for such families will also become “scarce”, leading some to warn of an even greater looming crisis in homelessness for which there appears to be no clear solution.

They are calling for an “energetic” response from Ms O’Sullivan to the crisis.

A spokesman for the Minister said there was “no doubt” the issue of homelessness among families was a growing issue but said “a number of initiatives” were under way to increase housing delivery.


Social housing
Originally from the Tallaght area, Ms McMahon had been living in Athy, Co Kildare. When her relationship with the children’s father broke down about 18 months ago, she moved back to Tallaght and applied to South Dublin County Council for social housing. She was advised she would be waiting about nine years for a house.