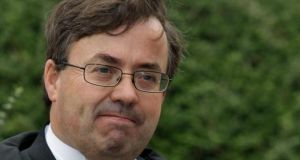 Mr Justice Gerard Hogan: stressed this was not endorsing the private school at the expense of the other one

A High Court judge yesterday ruled that a 12-year-old boy should be enrolled in a fee-paying private secondary school rather than one in the public system.

The unusual case involved the son of a couple who have separated and are living apart. Mr Justice Gerard Hogan said that when two parents could not agree on a choice of school for their son, the role of the court in resolving the dispute was a “difficult and troubling question on where there is little, if any, contemporary judicial authority”.

The case came before the High Court on appeal from the Circuit Court which had ruled that the boy should go to a school in the public system favoured by his father. Mr Justice Hogan said the father maintained that this was a perfectly good school and insisted the family could not afford private education. However, the boy’s mother was most anxious that he “be given the very best opportunity in life” and the family should not pass up the opportunity to attend a private school which had offered him a place. This school, the judge said, had an outstanding reputation and was “by common consent, one of the leading schools in the country”.

The judge said the parties were agreed that the boy had very considerable talents.

Mr Justice Hogan said that since the Circuit Court ruling the private school had offered the family a 50 per cent discount on the fees and the mother’s parents had indicated they would be prepared to pay the balance. The boy’s father felt these commitments were vague and indefinite, and had an objection in principle to his son’s educational costs being discharged by other family members.

Ruling that the mother should be allowed to enrol the boy at the private school, the judge noted the boy himself wished to attend it.

He found that the boy’s educational welfare would be best served by attending the private school.

He stressed this was not endorsing the private school at the expense of the other one.