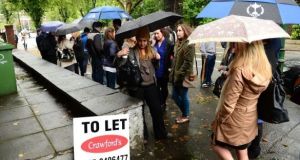 People hoping to rent a propertyin Dublin. A report by estate agent Savills Ireland has warned the cost of renting a home in the Republic could increase by 25% over the next two years

Landlords in Dublin are seeking rent increases of up to 40 per cent from some tenants, a campaign group has said.

The Secure Rents campaign is calling on Minister for Housing Simon Coveney to regulate the market, link rents to the Consumer Price Index and revoke a landlord’s right to evict tenants when selling properties.

Prepared to be shocked! Check out our #RentCalculator to see what rent you can expect to pay in 2021. https://t.co/p7xRk04vDe pic.twitter.com/hSlWS4WN5J

Patrick Bresnihan, of the Dublin Tenants’Association, told the campaign’s launch it was “necessary and important” to help renters as many would never be able to afford to buy a house.

He said a number of people had contacted the group for help after a 40 per cent rent increase was sought. “It turns out there is not much they can do about it with how things are at the moment. There’s a level of fear and anxiety you can see on people’s faces.”

“People are at the end of what they can cope with. On a societal level we can no longer tolerate a situation where working people often spend more than half their income keeping a roof over their heads.

“Economically it is imperative that people have spending money left over after rent day to support local businesses...Morally, we cannot allow any more of our citizens to be driven into homelessness.”

A report published by estate agent Savills Ireland this month warned the cost of renting a home in the Republic could increase by as much as 25 per cent over the next two years because of a shortage of supply and difficulties buying property.