Bishops should be encouraged not to be “yes men” but “leaders who can speak freely”, who consult with rank-and-file Catholics and then make decisions along with the pope 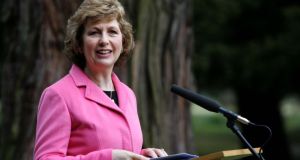 Mary McAleese: senior church leaders have “until now” believed the church could only survive through “unquestioning obedience to the exclusively top-down teaching magisterium”. Photograph: David Sleator -

Bishops and the laity, particularly women, must be given greater influence in the Catholic Church, the former president of Ireland, Mary McAleese, has said. She was speaking at Cambridge University.

Bishops should be encouraged not to be “yes men” but “leaders who can speak freely”, who consult with rank-and-file Catholics and then make decisions along with the pope, she said.

Senior church leaders have “until now” believed the church could only survive through “unquestioning obedience to the exclusively top-down teaching magisterium.

“That tight-grip approach has had very damaging consequences for the church in the modern world”, she said, in a lecture on church governance to the Van Hugel Institute in Cambridge last night.

The pope could give a synod of bishops decision-making powers even though “no pope has ever done so and Pope Benedict is on record as being against doing so. Yet this is by far the most straightforward way of creating at least an embryonic form of collegial episcopal decision-making in the Catholic Church, she said.

The “most exciting” way of bringing about reform would be to give a direct voice to each bishop, where issues would be decided by a majority canvassed by post or email.

Meanwhile, rank-and-file Catholics must also be involved: “The absence of laity and in particular women from ecclesial decision-making and high- level spheres of influence is a line that cannot hold; in fact it is a line that is rapidly leaching trust and credibility.”

Pope Francis has “openly acknowledged” the problem that exists, but he has not yet put forward “any practical solutions”, said Mrs McAleese, who was a professor of law at Trinity College and who has been studying canon law in Dublin and Rome.

Bishops have already displayed an appetite for change and the “noisy, messy, argumentative church” envisaged by Pope John XXIII in the Vatican Council in the 1960s. Such a healthy, vibrant debate would see a Catholic Church “engaged in active listening and talking top-down, sideways and bottom-up, unafraid of bad news, unafraid of healthy debate”.

Pope Francis had arrived “from Argentina with a blowtorch in his suitcase”, but it was difficult to know if “the charismatic and popular Francis has time on his side. His refreshing approach seems to have slowed the tide of cynicism, but whether he can turn the tide remains to be seen,” she said, in a speech entitled “C hurch Governance – The Imperative of Collegiality ”.