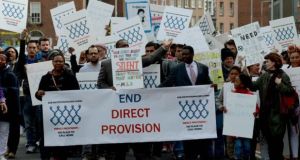 The Irish Refugee Council said important changes to the Freedom of Information Act were rushed through the Oireachtas before the Easter break without adequate time for debate.

The Irish Refugee Council has expressed its “concern” at the manner in which restrictions to the Freedom of Information Act, as it applies to bodies dealing with asylum and refugee issues, were “rushed” through the Oireachtas before Easter.

Both Houses debated and approved the restrictions on the date from which the records of two refugee bodies - Refugee Appeals Tribunal and the Refugee Applications Commissioner - can be now be accessed under the Act.

While the Act applies from April 21st, 2008, and the public can apple for records dating form then, the new restrictions mean records from these bodies can only be applied for from October 14th, 2014.

Under the Act the Minister for Public Expenditure and Reform, Brendan Howlin has the power to alter the effective date for different bodies.

Proposing his intentions to the Dáil on Thursday he said his reason was that the “organisations hold large volumes of information and for them to process freedom of information requests back to 2008 would impose a significant administrative burden and lead to delays in the administration of their core business”.

Opposing the proposals, Mary-Lou McDonald, Sinn Féin spokeswoman on public expenditure, described the plan as “troubling”. She said Ireland had “an absolutely disgraceful regime for dealing with refugees and asylum seekers” which was “shrouded in secrecy”. “Rather than shine a light on this area the Minister wants to maintain that secrecy.”

Sue Conlon, chief executive of the Irish Refugee Council, said the organisation was “concerned that important changes to the Freedom of Information Act were rushed through the Oireachtas before the Easter break without adequate time for debate.

“Such conduct seems inconsistent with the principle of ‘freedom of information’.”

“In particular, the decision to deny access to the records of the Office of the Refugee Applications Commissioner and the Refugee Appeals Tribunal prior to October 14th, 2014 means that vital information which would help explain the delays in the current asylum system is not available for public scrutiny.

“Given concerns in the past about the conduct of both bodies, it is in the public interest for there to be unrestricted access, limited only to the need to protect the identity of asylum seekers.”

Restrictions on the date from which information will be made available from the Private Residential Tenancies Board under the Act were also passed - to April 21st, 2012 and to a number of other statutory bodies.