Over 4,000 sick and elderly still waiting for help in spite of June announcement

Mark O'Brien has Cadasil syndrome. He can't walk, he can't talk and suffers from migranes, strokes and excessive tiredness. His father Willy feels the HSE are failing to help him. Video: Enda O'Dowd. 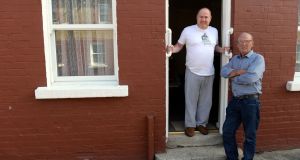 Willie O’Brien and his son Mark (left). “If you get sick and don’t have money in this country, you’re finished.” Photograph: Eric Luke

Over 4,000 elderly and ill people are still waiting for home-helps and homecare packages, despite a promise of €40 million extra for such services earlier this year.

Minister for Health Simon Harris announced the additional funding for homecare on June 7th as part of a wider increase in HSE funding.

However, figures from the HSE show this week there are 2,097 people waiting for home-help hours and 2,256 for homecare packages. Homecare packages include other services, such as nursing and various therapies.

Among those waiting is Mark O’Brien (44), who had a stroke two years ago. Though he lives independently, in a small council flat in Dún Laoghaire, Dublin, he is dependent on his elderly parents for much of his care.

The former truck driver has a hereditary condition, Cadasil syndrome, which manifests as tiredness, migraines and strokes. Other members of his family also have the syndrome but Mark has a serious form of it and suffered a stroke at home in May 2014.

He is now almost totally house-bound, unable to walk more than 20 paces without needing to rest, and cannot say more than a couple of words without becoming exhausted. He spends his days in bed or sitting in an armchair watching television. Housework and cooking are beyond his energy levels. While he can get to nearby shops for groceries, the round trip, which should take 20 minutes, takes him two hours and he needs to lie down afterwards for several hours.

His parents, Willy and Dorothy, first asked the HSE for home-help hours in May 2015, but have been told there are no funds. Both are retired, and their only income is the State contributory pension.

They call to his home four times a week, “to make the bed and hoover and cook” and to keep him company.

However Willy, who also has Cadasil syndrome, tires easily, while Dorothy worries about Mark. “It’s always playing on her mind,” he says.

“We’ll both be 70 this year. The day is coming when we won’t be able to get down here. If something happens to us, what is going to happen then?” They also have a daughter, but she is married and living in Limerick.

The couple contacted People Before Profit TD Richard Boyd Barrett, who made representations on their behalf. A letter from the HSE dated 30th June – three weeks after the additional €40 million was announced – told Mr Boyd Barrett: “The budget for homecare hours is at capacity but we are actively seeking funding.”

“I don’t blame the HSE. I blame the Government. I am sick of fighting for everything. If you get sick and don’t have money in this country, you’re finished.”

A spokeswoman said the demand for HSE homecare hours would continue to grow due to our ageing population.

“All those waiting are prioritised in order of need and provided with service as soon as possible.”

The older people’s charity Alone says home-help hours have been cut by 1.58 million since 2010 while the number of older people has risen by 18 per cent. The promised increases in funding this year will do little to make up the shortfall, it said.

Fianna Fáil TD for Roscommon-Galway Eugene Murphy said cuts to home-help services were “fast developing into a crisis” and called on the HSE to “curtail” its use of agencies to provide these services. “The current approach is leading to spiralling costs and zero contract hours for carers,” he said.