Emotions high at Dublin Airport as emigrants fly out

People head back to their adopted homes after Christmas period

Emotional scenes at Dublin Airport as hundreds of Irish people say farewell to friends and family after the Christmas break in January 2014.Video: Bryan O'Brien 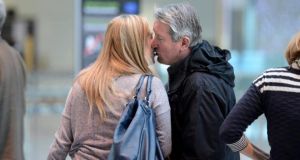 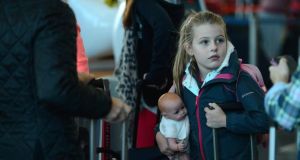 JoAlannah Pollack getting set to head for Australia today with her mother at Dublin Airport. Photograph: Cyril Byrne/The Irish Times

Tears of joy that had been on display at Dublin Airport in the run-up to Christmas returned to tears of sorrow today as emigrants returned to their adopted homes after the holidays.

A man in his 60s strode away from the departure gates fighting back tears as his son headed towards the gate. A few moments later, the father returned to stand beside his wife who was waiting for the final wave.

They held on to each other and stood in silence as the young man went through the doors.

There were lots of hugs and kisses at the departure gates before Maeve and John Hardiman let their family go. Their son Niall was returning to Chicago with his wife Katie and children Johnny (3) and Nina (4 months). “We’ll see them in the summer, hopefully,” said John. “And there’s Skype. Thank God for it. It’s just wonderful.”

They were also waving off their daughter Sharon and her new husband, Michael McHugh, who were embarking on their honeymoon to several far-flung places, starting in Dubai. “And another son went earlier this morning to Dubai,” Maeve said. “It’s crazy. Someone said it’s going to be a big anticlimax for us now but I’m looking forward to it. Bring it on.”

Beside them, Mary Kerwin was waving as her sister and two teenage nieces went through the departure gates, bound for California. “My sister comes home every second year but always during the summer, so this was her first Christmas at home in 26 years,” she explained. “My brothers came from London and Edinburgh too so it was a lovely family reunion.”

Alastair and Liz Rowan were having a final hug with their daughter Anna before she left for Perth, but hers will be a shorter stay. She is going to work with Christian organisation YWAM (Youth With a Mission) for six months. “She’s only 18 and she’s doing it all on her own,” her proud father said.

Downstairs, Linda O’Driscoll was queuing to check in at the Emirates desk. She was returning to her teaching job in Dubai after a two-week holiday at home in Caragh, Co Kildare. “I’ve been there two and a half years,” she said. “I’m thinking I’ll come home at the end of June. It’s hard going back every time after Christmas. It’s not the same over there, especially at Christmas.”

Behind her, Fiona Pollack was travelling back to Sydney with her daughter Alannah (8). “I’ve been living in Australia for about 22 years,” she said. “It’s about 32 degrees back in Sydney, but we don’t come back for the weather. I’d love to come home. I’ve got older kids in university over there and as soon as they are done, I’d like to come back.”

She said she was always torn when it came to returning to Sydney. “My parents are getting older now and I feel guilty because it takes more out of them every time we leave.”

Keith and Jennifer O’Gorman were returning to Perth with their daughter Ciara. “We’ve been living there for six or seven years so we are used to it now,” he said. Asked whether he might ever return home, he said: “If the Irish Government promised me a job, maybe. When I left I had no reason to stay. I’m in the construction industry so there was no work. I got to Perth before the rush.”

Keith’s father Pat said he felt like he was spending half his time in the airport these days. “Our daughter is over in Terminal 1, going back to Strasbourg. We have another lad in Vancouver and a lassie in London. Four away and two in Ireland.

“It was the first Christmas in six years to have them all together. We’ll get a break for a few days to recover and then we’ll miss them again.”

Dublin Airport Authority spokeswoman Siobhán Moore said the busiest day for departures was last Friday, December 27th. Some 660,000 passengers travelled through the airport during the Christmas season and passenger numbers are returning to normal now.