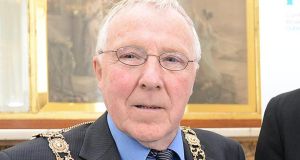 Lord Mayor Christy Burke: told members he had met people outside the chamber on the street preparing to sleep in the porches. Photograph: Eric Luke

During a debate on housing at the monthly meeting yesterday, officials said there were “measures that can be taken” in addition to direct State funding of social housing.

The officials were responding to Lord Mayor Christy Burke, who is a volunteer with night-time services for the homeless and who called for “action rather than words” .

He told members he had earlier met people outside the chamber on the street preparing to sleep in the porches. “I just can’t handle that much more; I really can’t,” he said.

Green Party councillor Ciarán Cuffe said the council should audit its own resources in terms of sites and land and see how these could be developed to ease the problem.

The council’s housing manager Dick Brady said there were sources of finance which were “willing to invest” in housing.

Mr Brady said while he was anxious to move ahead with his invitation to property professionals and builders, he had been told that standing orders required he bring his plan to the next housing strategic policy committee, scheduled for next month.

Under the timetable, if the strategic policy committee approve Mr Brady’s plan, the proposal could get formal approval in November, the Lord Mayor said.