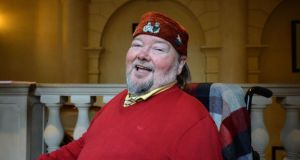 Martin Naughton faced the precipice. Fourteen steep concrete steps outside the Mater Hospital in Dublin stood between him and his ill friend inside. It was 1972 and few hospitals had special access areas for people with disabilities. He had to be hauled up the steps to get inside.

After visiting his friend, he wheeled himself out the doors and a man helped to tilt his chair backwards and eased him carefully towards the edge. That’s when it all went wrong.

“The guy that was holding me at the back slipped,” he says. “I came down. Bump! Bump! Bump! And I could see stars!”

Naughton chuckles all these years later when so much work, much of it his own, has been done to change not just how we treat the disabled but how we see them.

“Back in those days I was [perceived as] an invalid,” he says. “I was accepted out collecting, but not being involved in any normal thing like visiting someone. I went in and the matron wanted to know why I would want to visit, as a person with disability, and I wasn’t to be left alone on the premises. That was then. Why? How?”

Smiling broadly under his taqiyah-style hat, he told his staircase story and others from the past – how he could not have a purpose-trained carer stay with him in hospital; the dearth of disabled toilets.

His organisation, the Disability Federation of Ireland, did much to help inform the new guidelines. A long time coming, they reflect a gradual change in how society views people in need of such care.

As Naughton puts it, there was a time when a disabled person was “more someone who needed to be cared for rather than cared about”. Remarkably, the 60-year-old has been working and campaigning on the disability issue for most of his life – some 50 years by his estimation. And there’s no sign of him stopping any time soon.

He is helping to organise a nationwide Stand Up for your Rights campaign in May with the Áiseanna Tacaíochta network disability rights group.

Naughton was born with spinal muscular atrophy, “when the wiring of the system doesn’t connect properly to the muscles, particularly the legs, so by the time I was nine years old I was in a wheelchair. Up until then I was surviving on the muscles of a three-year-old”.

Born in Spiddal, Co Galway, in 1954, he was moved to Dublin nine years later and began his young life at St Mary’s Hospital in Baldoyle. He was a resident there until 1974 and later took charge of recreation for the other children.

“My job was to roll back the institutionalisation. After that I wanted to do a bit more. I had done quite a bit of campaigning at that stage within the walls.”

His first attempts at bringing about change had to do with relaxing the strictures of outmoded formal care and he did it with some support. It was also about changing the perception that professionals need always be in control.

“If you summarise the past it was very much a medical model: the doctor knows best,” he says. “It was to bring about a little bit of freedom so that people could get their hair cut the way they wanted. Come 12 o’clock everyone would come back for lunch. You got your boots shined, your hair washed, all at the same times.

In the 1980s he spent a long time travelling – Germany and particularly the US – where he learned a lot about alternatives and how those with disabilities could live, rather than merely exist, in society.

Led by people with disabilities, it began to formulate a strategy around training personal assistants to care for people outside of institutions.

With further funding two years later they began Operation Get Out. Ten people with places in care homes moved into regular apartments, where they lived independently for a year. Only two went back.

The centre was due to cease functioning in 1994 but four days of campaigning outside the Dáil eventually bent the political will and set a new standard for care in the State and in Government policy.

“Today, everything is geared toward individuals having a choice,” Naughton says. “I think what you will see more and more over the next decade will be people with disabilities being the face of their community. I am very excited about that.”