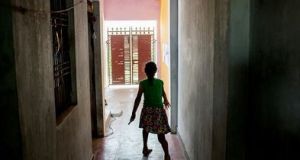 RTÉ Investigates reported that in May 2007 a young girl in respite care with a foster family alleged she had been abused by a then 18-year-old member of that family. File photograph: Getty Images

A number of children were left in the care of a foster family in the west of Ireland for several years despite sexual abuse allegations against one of the family members, an RTÉ Investigations Unit programme has said.

The RTÉ Investigates - Failure to Foster Care programme reported that concerns first arose in 2007 when a young girl in respite care with the family alleged she had been abused by the then 18-year-old family member.

The foster family at the centre of this case has, until recently, continued to provide some support services.

The foster family looked after a number of children at any one time both on long-term placements and with respite care.

In excess of 70 charges were brought against the then teenaged member of the foster family accused of sexual abuse, the programme discovered.

The charges – all of rape and buggery – cover a five-year period up to 2007 and relate to three victims – all three had received foster or respite care and were under 10 years of age at the time of the alleged assaults.

The programme reported that in May 2007 a young girl in respite care with the family alleged she had been abused by the then 18-year-old member of that family.

Following an investigation, the HSE assessed the disclosure by the child as “credible”.

The same child also claimed a second girl who had been living with the family for over a decade was also being abused by the same family member.

Two other children, however, remained at the home while the allegations were investigated by the HSE and Garda.

A care plan was put in place in which the alleged abuser was not to have unsupervised contact with them.

A file was sent to the Director of Public Prosecutions following the Garda investigation, but no prosecution followed.

The investigation discovered that four years later, the girl named by the initial complainant also alleged she had suffered sexual abuse by the same family member.

Following that allegation, the girl was removed from the foster home.

The third remaining foster child, a boy, was then removed from the home, but not until a year later.

On both occasions, in 2007 and 2011, the boy’s birth mother was not informed of the alleged abuse until five months after the allegations were made.

Despite the allegations and the decision to remove him, the boy was allowed to return to the family last year, at his own request, where he continued to receive part-time support up to recently.

During an appearance at the Public Accounts Committee in February, the HSE was asked whether any other similar cases to the Waterford care home case existed. Director of the HSE Tony O’Brien said they were not aware of any.

Last year RTÉ’s Investigations Unit revealed that “Grace”, a young woman with profound intellectual disabilities, was left in a foster home in Waterford for almost 20 years despite a succession of sexual abuse allegations.

“I think we know that a lot of bad stuff happened in lots of parts of the country in many settings and we have other investigative processes in relation to them but I have no lives lines of inquiry right now,” Mr O’Brien said at the time.