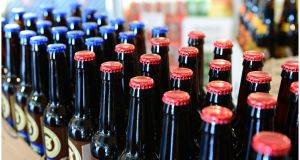 On foot of the research, Alcohol Action Ireland is calling for legislation to regulate the sector. Photograph: Bryan O’Brien

The majority of Irish children are regularly exposed to alcohol advertising and marketing by drinks companies, a new study has found.

Alcohol Action Ireland (AAI), which commissioned the research conducted by the Health Promotion Research Centre at NUI Galway, says the results show alcohol marketing to be a “child protection issue”.

Significant exposure to material, it said, increases the likelihood that children will drink, binge drink and engage in risky behaviour.

On foot of the research, the lobby is calling for legislation to regulate the sector.

The study, Alcohol Marketing and Young People: Drinking Behaviour in Ireland, is based on data collected from 686 children, aged 13-17, in 16 schools in three regions with the aid of a questionnaire.

It found 90 per cent were exposed to “traditional” or off-line advertising in the week prior to the study, with more than half of those surveyed citing four or more such advertisements a day.

It found 77 per cent reported online exposure and 61 per cent owned alcohol-branded merchandise.

More than half of Irish children (53.5 per cent) between the ages of 13 and 15 had previously consumed alcohol, it said.