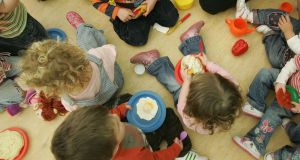 A quarter of parents have been prevented from returning to work by the cost of childcare, a report suggests. Photograph: Alan Betson/The Irish Times

A quarter of Irish parents have been prevented from returning to employment or training due to prohibitive childcare costs, a new report shows.

Parents in lower income groups are particularly badly hit: 56 per cent have been prevented from looking for a job due to childcare costs according to the research.

The report, commissioned by the Donegal County Childcare Committee and carried out by Indecon, an economic consultancy group, shows the average cost of full-time childcare for a two-child family stands at €16,500 a year.

Ireland has the second highest childcare costs as a percentage of average wages across the OECD.

Co-author of the report, economist and managing director of Indecon, Alan Gray, said before the report was commissioned four months ago, economists were uncertain as to the factual position around such costs.

“We knew that childcare costs were high but we didn’t know to what extent was that a barrier to employment,” he said, adding that the evidence was “quite stark”.

The report makes three recommendations to incentivise people to take up employment:

“First of all, for long-term unemployed individuals that there should be a subsidy of 67 per cent of childcare costs up to a limit of €5,000 per annum,” he said.

‘Trivial cost’
Mr Gray said the net cost to the exchequer would be about €20 million per annum, but that this was a “relatively trivial” amount in terms of the wider economic and societal benefits. He said the subsidies should apply to all tax-compliant and HSE approved childcare facilities and not just community childcare centres.

Minister for Children Frances Fitzgerald, who launched the report, said she would examine its recommendations in the context of a planned review next year of two childcare subsidy schemes.