Call for Irish teenager in Egyptian jail to be freed 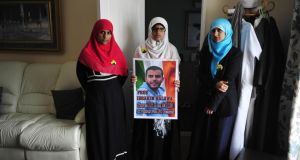 Omaima (left) Fatima and Somaia Halawa, sisters of Ibrahim Halawa (18) who is in prison in Egypt, at their home in Dublin. Photograph: Aidan Crawley

A coalition of international campaign groups has written a letter to the Government demanding the immediate release of Irish teenager Ibrahim Halawa (18), detained in Egypt for the past year. He faces trial alongside almost 500 defendants on charges including murder, attempted murder, membership of a terrorist organisation and destruction of public property. If convicted, his sentence could range from six months in prison to the death penalty.

The letter states Mr Halawa was 17 when he was arrested, but that evidence of his age, presented by his family, his lawyers and the Irish embassy, has been ignored. “While in jail, Ibrahim says he has been subjected to torture and other ill-treatment including electrocution, being stripped half naked, being beaten with whips and chains, and being held in solitary confinement,” the letter states. “No evidence has been provided to show that Ibrahim was ever involved in any illegal activity – instead he has been arrested for peacefully exercising his right to freedom of expression.”

It states that the teenager’s age means he is particularly vulnerable and in need of help but he has been far from alone in suffering mistreatment. “By intervening in his case, Ireland can send a strong message to the Egyptian authorities that the international community will not tolerate human rights abuses of this magnitude.”

The letter calls on Taoiseach Enda Kenny and the Government to make all possible efforts to secure his immediate and unconditional release as he is a “ prisoner of conscience detained solely for peacefully exercising his right to freedom of expression”. It also calls on the Egyptian government to respect its international obligations that stem from the UN Convention on the Rights of the Child.

The Government says it has made numerous attempts to raise the issue and seek fair treatment for Mr Halawa. Minister for Foreign Affairs Charlie Flanagan has expressed concern over the deferral of Mr Halawa’s trial, while the Irish embassy has visited the teenager more than 20 times in the past year and has raised his case with the Egyptian authorities.

Irish-born Mr Halawa was detained at al-Fatah mosque in Ramses Square, Cairo, last year, along with his three sisters during a banned march against the ousting of president Mohamed Morsi, a senior figure in the Muslim Brotherhood.

The sisters – Somaia (28), Fatima (23) and Omaima (21) – were held for three months, released on bail and allowed to return to Ireland. They refuse to return to Egypt and face trial. Last month, the trial of Mr Halawa was deferred and transferred to a new venue and a new judge, without a date being fixed.

Tineke Harris, a director at Reprieve, said: “This ‘mass trial’ is a mockery of justice and Ibrahim Halawa’s inclusion in it must be stopped. Ibrahim’s life is in grave danger.”