Call for cyber-stalking laws to be updated 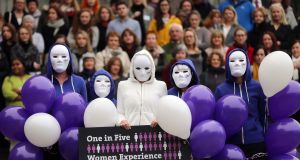 Members of Women’s Aid at Dublin City Council offices to draw attention to the one in five women they claim is a victim of digital abuse. Photograph: Niall Carson/PA

New legislation is required to combat digital abuse and domestic violence as the technology boom has rendered current laws “unfit”, a conference on the digital harassment of women has heard.

Current laws are “rarely used to protect women who are stalked by their boyfriends or exes”, the event organised by Women’s Aid heard yesterday, which was also International Day Opposing Violence against Women.

“We’re calling for new, all-encompassing legislation to better protect women from digital abuse and stalking, and for a better understanding of the harmful and insidious nature of digital abuse,” said Women’s Aid director Margaret Martin. “We recommend that a specific stalking offence be introduced in Irish law, with a comprehensive but not exhaustive definition, including new forms of cyber-stalking, and that stalking be recognised as grounds for a safety order,” she said.

Full-time commissioner with the Law Reform Commission Finola Flanagan said she wanted to see new legislation include “indirect harassment”, which is where abuse is not addressed directly to the victim.

“Undoubtedly that is the modernisation that is required,” she said. “The law needs to be modernised. If somebody publishes something on the internet about another person but not directly to the individual concerned – or a remark is published to a group of Facebook friends – that can be just as serious and can in fact be more damaging because it goes to so many people.”

Garda commissioner Nóirín O’Sullivan said the force was “very mindful” of the “great risks and dangers” that technology brought. She said the Garda was focused on tackling the issues of domestic violence and digital abuse, “not in an attempt to improve our figures or statistics” but to ensure the Garda was “supporting victims”.

Following a report by the Garda Inspectorate in November 2014, its chief inspector Robert Olson said “the whole issue” of domestic violence needed to be “thoroughly reviewed” within the force after some members saw investigations as “a waste of time”.

Ms O’Sullivan said the force was working to improve the experiences of victims who reported domestic violence. “The feedback we got back from victims, quite frankly, was that not everyone’s experience was what it should have been,” she added.

“Some people had excellent experiences, but others felt there was a ‘move on to the next crime’ [approach] and there wasn’t the consistency and follow-through in terms of keeping people informed.”

She added that the internet has created “a sense of dread” that never previously existed. “The internet is now in everyone’s pocket,” she said. “It’s close to where you are and what you’re doing. It’s insidious. You could be sitting at home and feel the vibration in your pocket – and the terror and the fear that can instil is absolutely huge.”

A recent EU-wide study on violence against women showed that 12 per cent of Irish women and girls over the age of 15 had experienced stalking, with 50 per cent being stalked, physically and online, by a partner or ex.