Minister for the Diaspora says vote could ‘evolve’ to Dáil elections 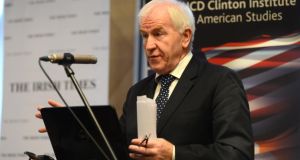 Minister of State Jimmy Deenihan: “It is a two-way process – the Irish nation and Government will have to connect better with the diaspora in order for the diaspora to connect with Ireland.” Photograph: Cyril Byrne/The Irish Times

The Government will make a decision before Christmas on whether to hold a referendum next year to permit Irish people living overseas to vote in presidential elections, the Minister of State for the Diaspora Jimmy Deenihan, has said ahead of a five-day visit to the United States.

The Minister, who arrives in New York today for his first trip to the US in his new role, said he saw no reason why the vote couldn’t be extended to Seanad elections, given that graduates of Trinity College Dublin and the National University of Ireland around the world vote in those ballots.

The diaspora might be allowed to vote in Dáil elections in the future, he said, but he acknowledged this would be “more difficult to administer if you had people voting in different constituencies”.

“In time it could evolve to [a] vote in the Dáil election,” he said.

Mr Deenihan is looking at the French model where seats are reserved in parliament for nationals living abroad but he said a diaspora vote in the Dáil election was not being considered right now.

In response to comments by New York-based Irish publisher Niall O’Dowd last week that the Irish diaspora was being “under-utilised” as an economic resource, Mr Deenihan said: “It is a two way process – the Irish nation and Government will have to connect better with the diaspora in order for the diaspora to connect with Ireland.”

Mr Deenihan said that the Department of the Environment was preparing a paper, for consideration by the Government, in response to a recommendation from the constitutional convention last year to extend voting rights in presidential elections to Irish citizens in Northern Ireland and Irish emigrants.

“It is something that I would be very supportive of. That memorandum will be going to Government shortly,” he said.

“I would hope that one of the referendums next year would be asking the people would they favour granting a vote.”

The Fine Gael Minister from the Kerry North-Limerick West constituency will meet members of the Irish community on visits to New York city and Philadelphia this week. He will also open the Irish International Business Network conference on Thursday.

He expects executive action promised by President Barack Obama and other initiatives in the House of Representatives, where a Senate immigration reform Bill has not been taken by Republicans, “will be very important for the undocumented” in the new Congress next year. About 33,400 people left Ireland for the US between April 2008 and April 2014, according to the Central Statistics Office. Emigration to the US has lagged behind the numbers leaving for the UK, the rest of Europe and Australia during that period.

Mr Deenihan’s visit is part of a number of trips to engage with the diaspora. He visited England last month and will travel to Australia in the coming weeks.

He said he would “seriously consider” a proposal by Mr O’Dowd that Ireland copy Israel’s Taglit-Birthright programme, which brings thousands of young Jewish people to Israel every year, to strengthen ties between Ireland and Irish living overseas.