If same-sex vote carried, the church’s view on marriage and that of State radically different 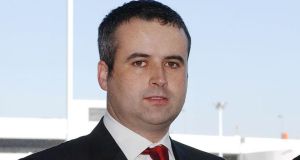 Martin Long, director of the Catholic Communications Office said: “At the moment on behalf of the State, the priest acts as the solemniser of the marriage between a woman and a man”

Ireland’s Catholic bishops spokesman has said the church may no longer perform the civil aspects of weddings if marriage is extended to same-sex couples.

The move would mean the tens of thousands of couples who get married in Catholic churches each year would have to go elsewhere to have their marriage legally recognised by the State.

At present, the signing of the Marriage Registration Form – a civil document required by the State in order to recognise a marriage – takes place after the wedding Mass.

If the church carries through on its threat to bring the practice to an end, it will mean that couples will not officially be married by the church ceremony.

This weekend a spokesman for the Irish Catholic Bishops said he believed that priests would be unlikely to have any issue with the bishops’ possible move to force all couples marrying in the church to carry out the civil aspect of their marriage elsewhere.

Currently in a church wedding, after the Mass has ended the couple, the solemniser – in this case a priest – and the witnesses must all sign a civil document called the Marriage Registration Form. This form is issued by a local registrar and the completed one must be returned to a registrar before a marriage certificate can be obtained.

The stance articulated by the spokesman for the Irish Catholic Bishops is a reaffirmation of a warning contained in the bishops’ submission to the Constitutional Convention in 2013. In this they said that any change to the definition of marriage would mean the Church could no longer co-operate with the civil aspect of marriage.

Martin Long, director of the Catholic Communications Office said then: “At the moment on behalf of the State, the priest acts as the solemniser of the marriage between a woman and a man. Obviously if the definition of marriage changes then this role will change.”

He added: “If the referendum is passed the Church’s view and the State’s view of marriage will be radically different. It’s reasonable that the bishops may decide to separate the two.”

Mr Long said that guidelines for dioceses would be considered at a meeting of the Bishops’ Committee on Marriage and Family later this month. The committee is chaired by Bishop of Clogher Liam MacDaid, who was unavailable for comment.

‘A matter for bishops’

The spokesman said the scenario where a local priest might disagree with the new role was illogical and unlikely, adding: “It’s not an issue. A priest’s role is to join two people in the eyes of God only. A priest is already undertaking a service which is not central to his ministry (in carrying out the civil role)”.

Fr Brendan Hoban from the Association of Catholic Priests said last night that he had heard suggestions that the Church would refuse to carry out the civil role “in a huff” but that he didn’t think it would happen.

He said: “Why would it bother? It would be unnecessary. You’re only making it difficult and more expensive on these couples. I wouldn’t expect to see it.”

In a speech last month the Catholic Archbishop of Dublin Diarmuid Martin said that the Catholic bishops did not support the referendum and called on people to reflect on the implications for marriage of it being passed.