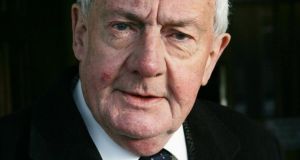 Desmond O’Malley: “The contempt shown by Anglo Irish Bank for the Irish people and for their welfare and their public institutions was probably not very different from the attitude taken up by some of the other banks.” Photograph: Cyril Byrne

Anglo Irish was probably not the only bank to treat the Irish people and the institutions of the State with contempt, according to former Progressive Democrat leader Desmond O’Malley.

He said the unacceptable and unpleasant face of the Celtic Tiger had been well and truly exhibited during the past week.

“The contempt shown by Anglo Irish Bank for the Irish people and for their welfare and their public institutions was probably not very different from the attitude taken up by some of the other banks. We just do not have first-hand aural evidence of the attitude of the others yet,” he said.

Mr O’Malley said he recalled the manner in which Allied Irish Banks were assisted by the Central Bank in the 1980s after the “ignominious debacle with the Insurance Corporation of Ireland, which they acquired without doing any proper due diligence”.

He said the Central Bank had failed to deal with the frequent malpractices of AIB and its only concern appeared to be to save the bank at all costs and let the Irish insuring public bear the cost.

Deplorable record
“Similarly, the bank took precedence over the public welfare when I was told that I could not insist on AIB repaying its debt to the Irish State before I issued it with a life assurance licence,” he said. “I thought I was being prudent, given their deplorable record in general insurance. Pusillanimous and deferential regulations, and a sort of inferiority complex in dealing with cowboys, are not the best way of protecting the public or advancing the economy.”

Mr O’Malley expressed surprise that there had been very little civil litigation as a result of the collapse of the banks here. “Various actions by investors would have been instituted in other countries. Banks traded when they were insolvent. They issued statements that misled that market. Not alone are these civil wrongs. In most countries these matters would also be breaches of the criminal law.”

Mr O’Malley was launching The Fall of the Celtic Tiger by Donal Donovan and Antoin Murphy. He said the book made it absolutely clear that the banks were only part of the problem.

Excessive expenditure
“Even if the banks had not imploded into insolvency, we had a very serious problem anyway due to grossly excessive public expenditure.”

He said property-related fiscal incentives had formed a major part of government policy for at least two decades and these had “contributed greatly to our downfall”.

“The demand for such useless, even damaging, policies frequently came from unelected, self-serving groups like the inmates of the Galway tent or the so-called social partners,” he said.