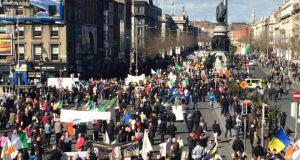 A new political reality could emerge from the anti-water charges campaign here, as it did in Bolivia in the early 2000s, a leading international expert on social movements said today.

Professor Eduardo Silva, originally from Chile and now teaching at the Centre for Latin American Studies at the University of Missouri, was addressing a meeting of social activists in Drimnagh today.

He said there were many similarities between the ‘Water War’ which began in Cochabamba, Bolivia’s third largest city in 2000, and the Right2Water campaign here.

He said the Bolivian government, under the weight of huge international debt, moved to privatise the water infrastructure under direction of the World Bank, at the end of 1999.

“The Government was inept and arrogant in the way it moved to implement the plan. What really irked people was the assumption that water could be commodified.

“Resistance to the installation of water metres began locally and the mobilisation began from below, in small localities, and spread. People had a new sense of community and came out on to the streets.”

The campaign was supported by a wide array of interests, including the labour movement, housing and homelessness campaigners, sweat-shop workers, coco farmers and grew to become a wider campaign against neo-liberalism and austerity.

It also spread beyond Cochambama to other cities including La Paz.

“The Bolivian Government was intransigent in its response, which led to an escalation of the movement.”

The protests led to a reversal of the plan to privatise the water infrastructure in April 2000.

“The issue of water became connected to an alternative political platform. The people wanted greater intervention of the State in managing the economy for the well-being of the people. This led to a decision that a new political platform was needed and a movement towards socialism,” Prof Silva said.

This was built up over the next few years and in 2006, he said, one of the leading activist from the the Water War, former cocoa farmer and native Aymara Indian, Evo Morales was elected president on a socialist platform.

In October last year, Mr Morales won an unprecedented third term, with 60 per cent of the popular vote, despite pressure from the United States against his re-election.

Dr Rory Hearne, of the University of Maynooth, said there were “huge parallels between what we are experiencing here and with what happened in Bolivia”.

“We should take the lessons from there to ensure the current potential for change is used to its best to here.”

He said research he had conducted into the anti-water charge movement here, in which over 2,500 people were surveyed, found the majority had never been involved in protest before.

“I would argue it is now possible to have a left Government. The majority of people want a Government that is not led by either Fianna Fail or Fine Gael. ”

The challenge was to build a movement, which reflected the wishes of the majority of the people, he said, and that the divisions often associated with the left in Ireland, be left behind.