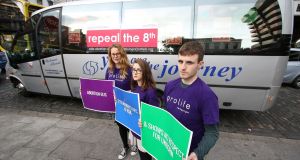 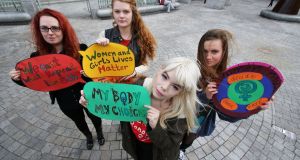 The Abortion Pill Bus organised by the organisation for Reproductive rights against Oppression, Sexism & Austerity (Rosa) set off on Friday morning from outside the Central Bank on Dame Street, Dublin embarking on a two day tour across Ireland carrying abortion pills and information on how Irish women can access abortions.

The group on board the bus, which is calling for the repeal of the Eighth amendment, will stop off at 1pm at the Spanish Arch in Galway and at 5pm on O’Connell Street in Limerick on Friday. The bus will visit Cork city at 11.30am on Saturday and finish up outside the Central bank in Dublin at 3.30pm for a final rally.

Rita Harrold of Rosa urged women around Ireland to visit the bus and share information with friends who may need abortion services in the future.

“We need to defend a woman’s right to choose,” said Ms Harrold, adding that the bus will provide information for women who may not have the money to travel overseas for an abortion. “We’re saying now. We’re not saying in 5 years, we’re not saying in 10 years, because the thousands of women who need abortions now will not wait.”

Women are invited to come on board the bus to use the private consultation room where they can speak to a doctor via Skype. The services available on board the bus were organised in conjunction with the Netherlands based WomenOnWeb.org digital community which supports women’s queries about abortion.

“These medicines we’re highlighting that are an option available to women are on the World Health Organisation list of essential medicines,” said Ms Harrold. “That’s because they are life-saving medicines.”

“Women’s lives are put in danger every single day around the world in countries where abortion is illegal. If you look at countries where there’s an abortion ban like in Ireland but there isn’t an option like travelling to the UK nearby, women are dying.”

Speaking as the bus prepared to leave Dublin, Trinity College Student Union president Lynn Ruane highlighted the growing numbers of students calling for a repeal of the 8th amendment.

“It just shows how much young people are now getting behind this,” said Ms Ruane. “They’re all 17, 18, 19 years of age and they really want to get behind this case.”

TD Ruth Coppinger, who is travelling on the bus, said many of the women to get in touch about abortion services already have children but can’t afford to have another child.

“This is not the 1980s,” said Ms Coppinger. “My generation was badly let down by the Catholic Church and the State collusion in controlling women’s bodies but this generation aren’t going to allow that happen.”

“We just had the first country to vote for marriage equality. Do they seriously think that they can hold back the tide to repeal the 8th amendment and stick in something that would still criminalise women and endanger the health of women in this country.”

Dr Peter Boylan, Consultant Obstetrician and Gynaecologist at the National Maternity Hospital on Holles Street, said the pills on board the bus were extensively used in other countries throughout Europe and safe when used “under medical supervision and correctly”.

He recommended that all women seeking abortion services meet with a doctor for a face-to-face assessment which would usually involved a pelvic ultrasound.

Dr Boylan reiterated that doctors in Ireland could not legally participate in an abortion under current legislation but said if a woman became ill after taking an abortion pill she could receive medical care in Ireland.

“If a woman has taken the tablets and she runs into any problems, then obviously she will be very well cared for if she presents herself to a hospital in this country,” said Dr Boylan. “Our duty is to care for people regardless of the circumstances that they find themselves in, regardless of the origin of the circumstances they find themselves in.”

Cora Sherlock, deputy chairwoman of the Pro-Life Campaign, who was present at the bus’ departure, described the campaign as “irresponsible”, saying the abortion pills were dangerous and that handing them out was “reprehensible”.

“Our message is very clear,” said Ms Sherlock. “It is that the abortion bus puts women’s lives at risk and shows no respect for the unborn. You hear nothing from any of these people about the right to life of unborn human beings in this country.”