Abortion is really about women and sex, says US columnist Katha Pollitt 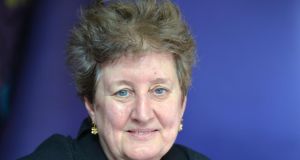 Katha Pollitt: “At least one in three women will have an abortion in her reproductive life.” Photograph: Alan Betson

She is in Dublin to visit her step-daughter. But while she is here, she is happy to mix the personal with the political and talk about her new book Pro: Reclaiming Abortion Rights.

The publishers have used big letters for the word “PRO” on the book’s cover and Pollitt is quite happy about it. “It’s ‘PRO’ for pro-choice. I wanted it to be in your face as a statement that is unapologetic and direct.”

She says her book, which will be out in Ireland soon, is addressed to the “millions” who are in the middle of the debate.

“They are just kind of squeamish about abortion. They think it’s icky and that’s a very dangerous position when abortion is on the chopping block [in many US states]. That is who I’m trying to reach.”

“At least one in three women will have an abortion in her reproductive life. Accidental pregnancy is very common, yet we talk about it like it’s very rare.”

She thinks it’s a “good thing if women only have the children that they are ready to have. It’s not good to have a child when you’re not in a good place in your life and don’t feel you can be a good parent to that child.

It’s not good for children either, she says, “to be born at a stage in their parents’ life when those parents can’t give them everything they need to thrive.”

The opponents of abortion tell a very simple story, she says. “That is the story that abortion is murder and every fertilised egg deserves to be born. The story that pro-choicers tell is more complicated. What the pro-choicers say is that every woman’s story is different.”

Things are not good for women in Ireland, she believes.

“If abortion is illegal, it’s very bad for women’s health. It doesn’t allow doctors to practise medicine in the way they want for their patients. Fewer women suffer when abortion is legal, than when it is illegal. It’s really up to Irish women and Irish men to move the issue forward. The politicians seem happy not to discuss it.

“Abortion is very much about controlling women’s sexuality and this discussion is taking place in this very licentious atmosphere where sex is everywhere and male dominance is also everywhere.”