Initiatives such as the Gathering seek financial input from abroad but sometimes the money needs to flow the other way. Photograph: Alan Betson

“Most people [in Ireland] don’t give a s**t about the diaspora except to shake them down for a few quid,” was Gabriel Byrne’s immortal condemnation of the Gathering before it had even begun last year.

While the tourism initiative to “bring the diaspora home” largely proved a success, Byrne’s words rang true for many emigrants, especially those who had not left by choice, who felt genuinely aggrieved that the State was attempting to reap a financial reward from them, after not giving them the opportunity to stay in their own country.

Ireland has been increasingly looking to the successful members of its communities abroad for a helping hand economically since the recession hit. They have appealed to them to do their bit for Ireland through initiatives such as the Gathering, and the three Global Irish Economic Forums, which have brought international Irish business leaders together for an annual think-in since 2009.

But it came as a surprise to many emigrants recently interviewed by the Clinton Institute in University College Dublin that financial support between Ireland and its diaspora actually flows both ways.

When the Government last reviewed its diaspora policy 12 years ago, the relationship between Ireland and its communities abroad was quite different to today.

In 2002, the economy was on the rise, outward migration was comparatively low, and the country was finally in a position to repay the debt it felt it owed its emigrants, particularly the elderly and vulnerable.

Out of this grew the Emigrant Support Programme, a dedicated fund to support organisations working with Irish communities overseas.

Over the past decade the scheme has provided about €115 million primarily to welfare-oriented groups, particularly in the UK. 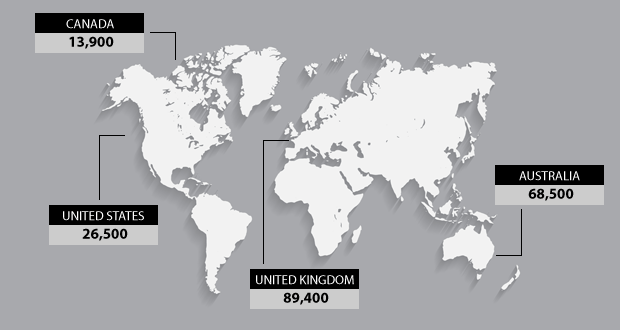 Since the recession hit in 2008, Ireland has once again became a country of net emigration. More than 200,000 have left in the intervening years, and although some are beginning to trickle back as the economy recovers, many others have put down firm roots in their new homes and may never return.

The outflow has had a profound impact not only on the society these emigrants left behind in Ireland, but also on the communities they have joined all around the world.

The “shrunken” and “ageing” Irish diaspora which two National University of Ireland researchers identified in a diaspora strategy proposal in 2008 has been much bolstered by this new wave of emigrants, who are generally younger, more highly educated, and more networked than ever before, as several recent studies have shown.

But it would be a mistake to think the new generation of Irish abroad are without needs and vulnerabilities.

Issues such as isolation and financial hardship still exist for many recent emigrants, while a rise in the number of young families emigrating to Australia and Canada has brought new challenges, for example.

Attempting to identify these needs over the past year, a team of three researchers from the Clinton Institute in University College Dublin have travelled to the main destination countries for recent Irish emigrants to interview community leaders and the emigrants themselves.

Combining their findings with analysis of other contemporary migration studies, and statistics on the numbers leaving and where they are going, they have produced a 120-page report which presents a comprehensive picture of how the Irish population in these regions has changed post-2008, and how they compare to each other.

Their report, published today, comes at a time when the State is actively seeking to formalise its diaspora policy. Earlier this year, the Government issued an invitation to Irish people living abroad to submit their thoughts on how Ireland could better “engage the diaspora”.

The Clinton Institute report, paid for by the Emigrant Support Programme, will form an integral part of the Government’s diaspora strategy action plan, to be published in September by the country’s first and newly appointed Minister of State for the Diaspora, Jimmy Deenihan.

“Ireland is not alone in engaging its diaspora,” says Clinton Institute director Liam Kennedy. “It is becoming quite a common thing for states which are trying to network relationships in a global environment.

“Ireland has one of the largest diaspora ratios per capita in the world, allegedly 70-plus million, and we are actually considered, in the policy space, among the top five countries in the world for diaspora engagement.”

So Ireland seems to be doing something right already but, as the Clinton Institute report highlights, the needs of the newest members of the Irish diaspora are changing fast.

How the ESP can continue providing support to this evolving demographic will be crucial in fostering trust between Ireland and its communities overseas into the future.

“Diaspora engagement is a pretty nebulous thing to pull off in policy terms. It depends on mutual respect and benefit on both sides,” Kennedy explains.

“I think Ireland is already doing a lot to get that balance right and, if they succeed, that will define the character of our engagement. And it will set us apart. There are very few other countries in the world who are supporting the vulnerable, though many others are engaging the successful.”

Opus Dei charity planning multimillion-euro apartments scheme in south Dublin 05:00
Eoghan Harris’s secret account was discovered as a result of poll data 01:39
Development of new national maternity hospital hit by row between Ministers 01:00
Local business operators hope Irish will return to Medjugorje 01:00
JWT closure a blow, but ‘the Irish will be the first back into Lourdes’ 01:00

1 Miriam Lord: Dublin Bay South gears up for the battle of the barristers

Thinking Anew – The importance of acceptance