In Oscar Wilde’s time, Irish people lived and loved much as they do now. But our laws and social conventions are still catching up 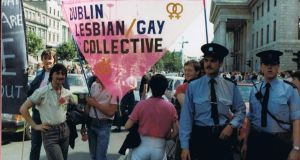 LP Hartley’s novel The Go-Between opens in a wonderfully arresting and thought-provoking way: “The past is a foreign country: they do things differently there.”

But is our past really a foreign country? My experience of writing biography, literary history and historical fiction has brought me to the conclusion that the past may be a foreign country in terms of clothes, hairstyles, social structures and laws but that private lives were as various, contradictory and rewardingly complex as our own.

Surely people are much the same now in this country as they were 100 years ago, in that foreign country called the past. They lived, worked, loved and hated much as we do now, and private lives were made around a variety of acknowledged and unacknowledged relationships, creating as many kinds of families as we have today.

But, in one crucial sense, the past – specifically our own Irish past – is indeed a foreign country. Consider the changes in the laws, social conventions and public perceptions around sexuality.

This came home to me very forcefully in the past month, when I was lucky enough to be part of two excellent events commemorating the life and the writings of Oscar Wilde and his family.

One event marked the 200th anniversary of the birth of his remarkable father, William Wilde, whose legacy was celebrated in his birthplace of Castlerea. The other event was in Enniskillen, where Oscar is now reclaimed as a distinguished former student of Portora Royal College and his plays and writings staged, discussed and admired in a popular and well-attended weekend-long festival.

I couldn’t help reflecting that this contemporary embracing of Wilde as a proud part of our literary heritage is a relatively recent development, and a very welcome one. It is part of a series of milestones in Irish gay rights.

In the aftermath of his trials for “gross indecency” at the Old Bailey in 1895, when he was convicted and sentenced to two years of hard labour, Wilde was bankrupted, his plays removed from the West End stage and his name erased from all public discussion except as a codename for “unspeakables of the Oscar Wilde sort” – or gay men, as we would now call them. In one particular foreign country, our Irish judicial past, Wilde’s London trial was paralleled by a number of high-profile cases in which men who were found to have had relationships with other men were also imprisoned. These included the Dublin Castle scandal of 1884, when a number of men working in the Castle administration were tried for having homosexual relations. Papers from the case include a number of letters that police seized to help secure conviction, letters that reveal touching evidence of a lively network of friends and lovers in the Dublin of the time, an underground culture of men who loved other men.

A similar high-profile legal case came with the furore around the 1907 theft of the Irish crown jewels, when opportunistic nationalist anger against crown administrators was expressed in virulently homophobic newspaper outpourings. In one sense much of the history of this particular past in 20th-century Ireland is a history of criminal investigation and legal prosecution. We sometimes glean some momentary glimpse of covert lives, hidden from view, existing outside the public gaze. When any representation of the homoerotic made it into the public arena, it was met with vehement opposition.

Witness the banning of Kate O’Brien’s beautifully realised, highly civilised autobiographical novel The Land of Spices, declared obscene and condemned by the Censorship Board for one sentence: “She saw her father and Etienne in the embrace of love.”

The slow process of change began when the Wolfenden report on homosexual offences and prostitution was published, in England, in 1957. As Ireland experienced radical economic, legal and social change during the last half of the 20th century and into the 21st, there began a reconsideration of the public role of Irish lesbian and gay lives.

Gay liberation, already a key political and social development in the UK and North America in the 1960s, found a new focus in Ireland in 1974, five years after the Stonewall riots in New York, with the foundation of the Irish Gay Rights Movement, in Dublin. The campaign for the decriminalisation of male homosexuality in Ireland (abolished in the UK in 1967) focused on a legal challenge taken by a university lecturer in English literature, David Norris. This battle around decriminalisation was a difficult one, like many of the social debates and battles in Ireland at this time.

In 1979 the National Gay Federation, which included Norris, set up the Hirschfield Centre in the then unfashionable Temple Bar area of Dublin; the centre published a series of in-house magazines, partly to provide a social network and partly to give support on political issues and on the Aids crisis of the 1980s.

David Norris brought his case for the decriminalisation of homosexuality to the High Court, where it was rejected, and then to the Supreme Court, where he was represented by Mary Robinson, and where it was also rejected, in 1983. That year the killers of a Dublin man, Declan Flynn, murdered in Fairview Park the previous year, were given suspended sentences. The resulting outrage led to marches, public protests and an increasing sense of political confidence for Irish lesbian and gay groups. The campaign group Glen – the Gay and Lesbian Equality Now – was founded.

Decriminalisation eventually took place after the European Court of Human Rights ruled that Ireland’s anti-gay laws contravened the European Convention on Human Rights of 1988. Finally, on June 24, 1993, Dáil Éireann passed a Bill decriminalising homosexuality. David Norris, now a senator in the Seanad, wrote in The Irish Times on June 25th that “when, next week, this Bill is passed by Seanad Éireann and sent to the President for signature I will, for the first time in my life, feel that I am at last a full and equal citizen in my own country.”

Aids had become a worldwide crisis in the 1980s. An Irish novel, Colm Tóibín’s The Blackwater Lightship, widely read and shortlisted for the Booker prize, brought an Irish Aids narrative right into mainstream Irish culture with its central character, the gravely ill Declan.

From this crucial moment came a series of other legal and social moments recognising the existence of Irish LGBT lives, as with the moment when, in 2010, lesbian and gay relationships were recognised by civil partnership, with some of civil marriage’s legal rights and entitlements.

If there is one thing I have learned from writing historical fiction and biography it is that private lives are much the same now as they were 100 years ago. But the past is a very much a foreign country in terms of laws and social attitudes. The possibility for marriage equality marks a crucial moment in our Irish present, a chance for us to do things differently in a way that Oscar Wilde would hardly recognise.

Éibhear Walshe is a novelist and senior lecturer in the school of modern English at University College Cork. His latest work is The Diary of Mary Travers