Killarney shad or goureens are found in just one Kerry lake 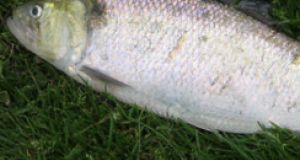 Scientists have unravelled the eventful family tree of a remarkable County Kerry resident right back to the Ice Age.

This is the fish episode of the ‘Who Do You Think You Are’ genealogy show and traces the family history of the Killarney shad - that’s the Shads of Killarney - born survivors with an apparent keen instinct to overcome adversity and adapt to dangerous environments.

Known locally as the ‘goureen’, it turns out that the Shads of Killarney have kept themselves to themselves for quite a while and are unique to one lake in the world, Lough Leane in Kerry. The herring-like fish are now “critically-endangered” and in need of protection.

The UCD, University of Salford and Inland Fisheries Ireland study is published in the journal Molecular Phylogenetics and Evolution, and reconstructs the origin of the shad, providing genetic evidence for the timing of colonisation of the lake after the last glaciations ended.

“Fish are programmed to go upstream to spawn and they came to the rivers after the ice retreated,” said Prof Stefano Mariani, the senior scientist involved. “Some of them got trapped and were ‘landlocked’ in freshwater lakes.”

Prof Mariani and Dr Ilaria Coscia used a “molecular clock” based on analysing the rate of DNA change to date the arrival of fish in the lake.

“Two groups of twaite shad arrived,” said Dr Coscia. “The first 16,000 years ago towards the end of the Ice Age and another branch arrived 7,000 years ago.”

Prof Mariani explained that the fish could no longer venture out to sea. “On top of being isolated spatially, these guys were forced to change their lifestyle, eat a different diet and live in fresh water. With these strong selective forces, inevitably you become something different.”

Today’s Killarney shad is now genetically isolated from its ancestors. “The two groups are no longer there. The lake became a genetic mixing pot and today they’re all the same,” said Prof Mariani.

The fish has become so adapted to its new habitat that no migration to the sea is needed for the completion of its life cycle.

The major concern for the goureen now is that a “catastrophic environmental event in Lough Leane could eliminate the entire genetic pool”, given that the fish is only present in one location in the world.