Spherical geometry: Going around in great circles to get to the point

That’s Maths: Spherical geometry is central to the study of geophysics and astronomy – and vital for navigation 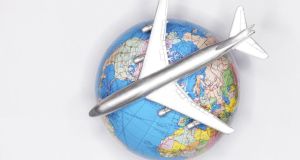 We live on a spherical Earth, so we cannot travel a straight-line path: we have to stick to the surface of the globe. Photograph: Thinkstock

The shortest distance between two points is a straight line. This is one of the basic principles of Euclidean geometry. But we live on a spherical Earth, so we cannot travel the straight line path from Dublin to New York: we have to stick to the surface of the globe, and the geometry we need is more complicated than the plane geometry of Euclid.

Spherical geometry is central to the study of geophysics and astronomy, and vital for navigation.

We can define a metric for the distance between two neighbouring points on the globe and use it to find the shortest route between them. Paths of minimum distance are called “geodesics” and they play the role of straight lines on the Earth. They are great circles with centres at the Earth’s centre. Flights from Paris to Vancouver pass over Greenland, far to the north of both cities, following a great circle route.

The Earth is embedded in three- dimensional Euclidean space, so nobody thought of spherical geometry as different, even though this was under our noses, hidden in plain sight. It took the genius of Gauss to spot its fundamental nature and to introduce the term “non-Euclidean geometry”.

Spherical geometry is just one flavour of non-Euclidean geometry. Defining other metrics for the distance between neighbouring points, we can construct entirely new geometries. If we use the paths of light as our
straight lines or geodesics, we get a new form of geometry quite distinct from either spherical geometry or the plane geometry of Euclid.

In physics, we learn that light travels in a straight line, but this is true only in a homogeneous medium. Where there are variations in the medium, such as the changing density of the atmosphere with height, light rays may bend, with interesting consequences. The downward- curving light rays define another form of geometry, called hyperbolic geometry.

Since the Earth is spherical, horizontal light rays can travel large distances if their curving path is about the same as the curvature of the Earth.

In unusual cases, where the air near the surface is very cold and dense, the curving light can come from beyond the horizon. Mariners may see vessels just over the horizon, or more distant land masses. About once in a decade, such weather conditions enable observers on Killiney Hill to see the mountains of Snowdonia.

Hyperbolic geometry has been studied intensively ever since it was formulated independently by three mathematicians, Bolyai, Lobachevsky and Gauss, almost 200 years ago. Bolyai described his breakthrough in a letter to his father: “I have created a new and different world out of nothing.”

We no longer doubt the spherical shape of the Earth, but the shape of the universe is a hot topic among cosmologists. General relativity tells us that matter causes space to curve, resulting in locally non-Euclidean geometry. But the global shape, or topology, of space is a mystery. Perhaps some entirely new geometry will be required to describe it.