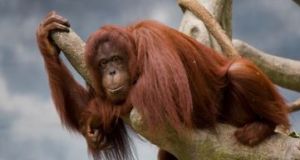 Dr Anna Marzec of the University of Zurich and her research team have been following a group of Bornean orangutans in the swamp forests of Indonesia’s Mawas Reserve since 2003. File photograph: Getty Images

Two female orangutans have been observed in what turned out to be a fight to the death - the first time such an event has been witnessed among members of this primate species.

Just as surprising was the recruitment of males, who assisted the females and supported them in the battle.

Such lethal fights between females have never been observed, said Dr Anna Marzec of the University of Zurich.

Even with aggressive males, a fight to the death is very rare.

Dr Marzec and her research team have been following a group of Bornean orangutans (Pongo pygmaeus wurmbill) in the swamp forests of Indonesia’s Mawas Reserve since 2003.

They had amassed more than 26,000 hours of observations up until the fatal attack, which took place in July 2014.

Over that time, only six female-on-female attacks had been seen - but none caused any visible injuries.

The lethal event involved Kondor, a young individual, and the much older Sidony, Dr Marzec and colleagues write in the Springer journal Behavioral Ecology and Sociobiology. The two had some limited history of violence, having become involved in a physical skirmish several years earlier.

In the days running up to the fight, Kondor was seen with a male called Ekko. On the day itself, the two approached Sidony and mated in front of her, and when she attempted to move away Kondor and Ekko attacked the older orangutan.

They attacked as a co-ordinated team, the authors write. While one attacked, the other blocked the victim’s escape route.

Ekko, with his long canine teeth, caused most of the serious injuries while acting as Kondor’s “hired gun”.

The balance of power then changed when another male, Guapo, arrived and chased Ekko away. Guapo then mated with Sidony and kept Kondor at bay.

When Sidony screamed, Guapo positioned himself between the females or escorted the older ape away, the authors say.

In all, the fight lasted for 33 minutes.

“This is quite unexpected, as in wild orangutan males and females have never been reported to form coalitions before,” said Dr Marzec.

“It is also the first report of males supporting females in their conflicts, with lethal outcome.”