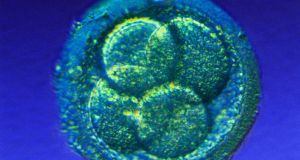 The aim was to replace defective mitochondrial DNA (mtDNA) that may have condemned the child to Leigh syndrome, a fatal disorder affecting the developing nervous system.

The child, who is now five months old, and his mother were treated by a US team in Mexico.

He was conceived from an egg containing nuclear DNA from his mother and father, and mitochondrial DNA from a “second” mother — an unknown female donor.

The aim was to replace defective mitochondrial DNA (mtDNA) that may have condemned him to Leigh syndrome, a fatal disorder affecting the developing nervous system.

Mitochondrial DNA is housed in the tiny rod-like “batteries” in cells that supply energy, and is passed down through the generations by mothers.

So far only the UK has given an official stamp of legal approval to the technique employed by the American doctors.

But the US team moved ahead by achieving the first live birth involving mitochondrial replacement.

Dr Dusko Ilic, an expert from King’s College London, told New Scientist magazine, which carries an exclusive report of the birth in its latest issue: “This is great news and a huge deal. It’s revolutionary”.

It is estimated that one in 4,000 people has an incurable mitochondrial disease.

The boy’s mother carries the Leigh syndrome mutation in about a quarter of her mitochondria. While she has suffered no ill effects, the disease killed her first two children, said New Scientist.

She and her husband sought the help of leading embryologist Dr John Zhang, medical director at the New Hope Fertility Centre in New York city. He used an approach called spindle nuclear transfer, which involves finding an egg from a willing donor and removing its nuclear DNA.

The nucleus from one of the mother’s eggs was then inserted into the donor egg. The result – an egg containing nuclear DNA from the mother and mtDNA from the donor – was fertilised with the father’s sperm. Five embryos were created, only one of which developed normally and was implanted in the mother’s womb.

While the US has not approved the technique, Mexico has “no rules”, Dr Zhang is reported to have said. He told New Scientist: “To save lives is the ethical thing to do.”

Tests of the baby’s mitochondria showed that less than 1 per cent carried the Leigh mutation, which is thought to be far too low to cause any problems. The work was briefly reported in a little-known scientific journal, Fertility and Sterility, in an article entitled “First live birth using human oocytes reconstituted by spindle nuclear transfer for mitochondrial DNA mutation causing Leigh syndrome”.

British experts congratulated the team but called for more information. Professor Doug Turnbull, from the University of Newcastle, said: “There have been extensive discussions in the UK to ensure that families with mitochondrial disease get the best possible advice about their reproductive options and that any new IVF-based technique is appropriately regulated and funded.

“This abstract gives very little information about the technique used, the follow-up of the child or the ethical approval process.”

Dr Ilic added: “This was an ice-breaker. The baby is reportedly healthy; hopefully, this will tame the more zealous critics, accelerate the field, and we will witness soon a birth of the first mitochondrial donation baby in the UK.

“But some questions remain. By performing the treatment in Mexico, the team were not subject to the same stringent regulation as some other countries would insist on. We have no way of knowing how skilful or prepared they were, and this may have been a risky thing to do. On the other hand, we have what appears to be a healthy baby. Because it was successful, fewer questions will be raised but it is important that we still ask them.”

Although Fertility and Sterility released a short summary of the procedure, full details have not yet been reported.

Dr Ilic said: “Was this the first time ever they performed the technique or were there other attempts and they are reporting this one because it was successful? This and other important questions remain unanswered because this work has not been published and the rest of the scientific community has been unable to examine it in detail. It’s vital that that happens soon.”

Professor Simon Fishel, president of the Care Fertility Group of IVF clinics, said: “This is a devastating disease that we do not wish children to be born with, and what’s more, we would wish to eradicate from any family lineage – and this technology will help achieve this.

“However, any first-time medical procedure moving from successful animal studies to the human, that will take several years until we understand its impact, is a necessary experimental step forward, which we hope and believe should be totally safe and utterly effective.

“Congratulations to this team and all those hoping to help these unfortunate families, and we should proceed with caution and due regulation.”