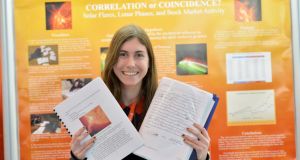 A student has more than doubled her money on the stock market by selling and buying stocks whenever a solar flare occurs.

Claire Nichols’ flutter on the market was on paper only and part of her project entry in the BT Young Scientist and Technology Exhibition under way at Dublin’s RDS. Even so, her simple method bumped up her investment by 210 per cent and allowed her to beat the performance of the Standard and Poors 500, which only saw an 81 per cent advance over the matching 13 year period.

“My hypothesis is connected to solar flares because they have been linked to negative mood swings,” says Nichols (15), a transition-year student from Sutton Park School in Dublin.

She decided to set up a theoretical collection of stocks worth $100,000 and then started trading them whenever a major solar flare occurred on the sun. These high-energy outbursts can send solar particles streaming towards us and these affect the Earth’s magnetic field.

She only traded when the flare was large and if it was heading towards us, she sold some of her holdings. Seven days later, after the solar particles had done their worst, she bought back exactly the same stocks.

The assumption is that traders responded to the negative vibes caused by the flare by taking a less confident view of the market and selling cheap.

She reaped the benefits by buying back the same stocks she had sold, but got them at a reduced cost. “The method outperformed the S&P 500 performance in 10 out of 13 years,” she says, and she always made a profit one way or the other. Values dipped sharply due to the market collapse of 2009, but she still caught up over time. The results of her assessment suggest there is a link between flares and market response.

Nichols has also looked at whether a full moon, again sometimes considered something that alters mood, might also provide a way to succeed on the stock market. She still has a way to go on that one, however, so the jury remains out on any influence exerted by the moon.