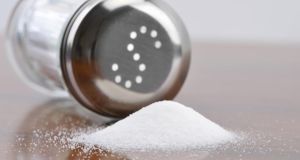 ‘One would have thought that NaCl would have been studied to death by now, but we discovered a new morphology for table salt’

Could table salt be used to make nano-wires? Scientists at Trinity College Dublin and the University of Cambridge have discovered that crystals of NaCl and other halides could “grow” tiny wires from a type of material called a supramolecular self-assembly gel.

“One would have thought that NaCl would have been studied to death by now, but we discovered a new morphology for table salt, something nobody had seen before,” says researcher Prof Thorfinnur (Thorri) Gunnlaugsson, a principal investigator at Trinity Biomedical Sciences Institute who co-authored a study about the findings in ACS Nano. “We found the growth of the NaCl wires by chance – researchers were working on the project, and, while analysing the gel material, they noticed and monitored over time the growth of unusual structures and realised that they were observing new and fascinating structures not previously reported. The fact it turned out to be table salt took us by surprise.”

The process they used to “grow” the wires offers insight into how to control crystal growth on the nano-scale, adds Prof Gunnlaugsson, who worked with Prof John Boland from Crann on the project. “Wires of all kinds will enable us to miniaturise structures and possibly build functional structures on the nano-scale,” he says. “And being able to grow such wires in a systematic and controlled manner would be a revolutionary step.”