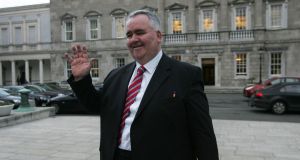 Willie Penrose said he believed the Labour party had been linked too much to the outgoing Government and talk about the economic recovery. Photograph: Cyril Byrne / THE IRISH TIMES

Labour TD Willie Penrose has signalled that party leader Joan Burton must step down, saying he believes that she will “act in the best interests of the party”.

“She will listen carefully and reflect on the views of the party” he told RTÉ’s Morning Ireland radio programme. He said it should not be a long drawn out process and is likely to happen after the formation of the Government.

He also questioned the need for a deputy leader since the party now has only seven TDs.

The Labour party should go back to reconnect with communities, he said.

“At the end of the day we suffered the impact of policies on the kitchen table. People are concerned about having enough money to pay bills, to pay the mortgage.

“Labour has always been to the forefont advocating social issues and causes. The Marriage Equality Referendum would not have happened without Labour. But at the end of the day we were linked too much to the outgoing Government.”

Ms Burton said on Wednesday she will act in the best interests of the party after hearing calls for her immediate resignation at a meeting in Dublin attended by general election candidates and former TDs.

A number of TDs in the last Dáil who lost their seats, including Ciarán Lynch and Michael McCarthy, and outgoing Senators John Whelan and Mary Moran insisted a change of leadership was necessary.

Mr Lynch said it was a time to rebuild and a new leadership was required while Mr McCarthy said Ms Burton’s leadership needed to end “sooner rather than later”.

Ms Burton told the meeting she did not believe a government would be formed for another month. At that point she would do what was in the “best interests of the Labour Party”, she said.

It is understood Labour may abstain in the vote for taoiseach next week after a meeting in Dublin attended by general election candidates took the view the party had no mandate to decide the shape of the next government.