Why a united Ireland will not happen anytime soon 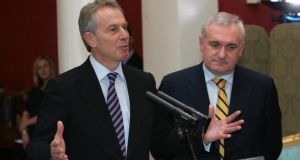 The trite but truthful answer as to whether a united Ireland will happen is that only time will tell.

Still, this week’s RTÉ/BBC poll seems to indicate that it will be quite some time before time does tell.

There are two big elections coming up in the months ahead, a general election in the Republic and Assembly elections in the North.

In both campaigns Sinn Féin will push for a poll on a united Ireland, as figures such as Gerry Adams and Martin McGuinness have been doing for years.

In turn, parties such as Fianna Fáil and Fine Gael, flexing their republican credentials, and the SDLP also will assert their united Ireland aspirations, while probably hesitant about pressing for any imminent plebiscite on the subject.

Moreover, next year is 2016, the centenary of the Easter Rising, so there is no doubting there will be discussion of the prospects for a united Ireland, just as there was in 1966 on the 50th anniversary of the Rising.

Under the 1998 Belfast Agreement, unification can only happen through the consent principle, that is by a majority of people in the North voting for unity, as well as a majority in the Republic.

If Catholicism and Protestantism were absolutely and respectively synonymous with nationalism and unionism, it could be argued a united Ireland would happen sooner rather than later. But it’s not that simple.

However, the census demonstrated only one in four of the overall Northern Ireland population saw themselves as exclusively Irish.

In recent years, polls held separately by the BBC and the Belfast Telegraph showed fewer than one in five people in the North would vote now for unity.

Those findings were reinforced in the poll presented on RTÉ’s Prime Time and on Nolan Live on BBC Northern Ireland last Wednesday night.

The survey of more than 2,000 people found 13 per cent of Northern Ireland people favoured unity, with the figure at 36 per cent in the South.

You cannot, so to speak, predict history and we all know that unforeseen circumstances and the law of unintended consequences can make the unexpected happen.

But for Northern Secretary Theresa Villiers to call a Border poll she must, at least, have some indications that a majority in the North might say Yes to unity.

Right now, as illustrated by the latest poll, there are absolutely no such indications.