We need to tackle culture of whistleblower reprisal

Speaking out against wrongdoing in the workplace should be commended, not vilified 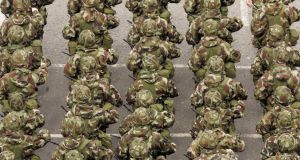 Who dares to step out of line? “The almost universal experience of Irish whistleblowers, in both public and private sectors – whether they be soldiers, gardaí, nurses, midwives, priests or even journalists – is the immediate destruction of their chosen career path.” Photograph: Alan Betson

In light of so many recent scandals and crises of public confidence in Ireland, the term whistleblower is high on the news agenda. Indeed, in recent days my children have been asking me what a whistleblower is.

I have tried to explain that a whistleblower is someone who reports wrongdoing in the workplace. Someone who tries to do the right thing – a workplace Samaritan of sorts. They understand this explanation in an age-appropriate manner. My six-year-old nods sagely and asks the question: “So, whistleblowers are the good guys then?” And well he might ask.

In Irish public discourse, whistleblowers are treated with suspicion. Perhaps this is something to do with our historical obsession with informers – an entirely different phenomenon. Informers deliberately do the wrong thing – engage in unethical behaviour – for personal gain or revenge. Whistleblowers however, by definition, make an ethical choice. When confronted with wrongdoing, corruption or abuse, they choose not to collaborate. They opt for right over wrong and in so doing vindicate their loyalty to the common good. Their actions are not “disgusting”, but profoundly pro-social.

Imagine if we had had whistleblowers during the so-called Celtic Tiger era? Imagine if we had them in the Irish banking sector, Department of Finance or financial regulatory agencies? Imagine, if you can, whistleblowers in the Galway tent? Or indeed among the ranks of ministers, advisers and programme managers that danced this country off an ethical and fiscal cliff. After the intellectual and ethical failures of the Celtic Tiger, Ireland is one country in particular that ought to treasure its whistleblowers.

In recent months however, in the Irish print and electronic media, I have listened to some of the most appalling and ill-informed discussion of whistleblowing that I have ever heard. They are commonly referred to in pejorative terms – often by high-profile journalists who ought to know better. In one case in particular, a respected political correspondent described whistleblowers as, “the type of persons you wouldn’t go for a cup of coffee with”. Other commentators and contributors have described whistleblowers as “outcasts” or “social pariahs”. On one panel discussion on national radio an “expert” used the words “tout” or “turncoat” to describe them.


Professional and personal loss
Whistleblowers rarely get to participate in such panel discussions. In many cases, they are too busy reassemble their lives. For Ireland has a unique and dubious distinction when it comes to whistleblowers. Almost 100 per cent of Irish whistleblowers are subjected to what is known in the growing international literature on the activity as “Whistleblower Reprisal”.

Here such reprisal has enormous consequences for workers or volunteers who choose to speak up against abuse and corruption. The almost universal experience of Irish whistleblowers, in public and private sectors – whether they be soldiers, gardaí, nurses, midwives, priests or even journalists – is the immediate destruction of their chosen career path. Whistleblower reprisal Irish-style which normally consists of character assassination, followed by isolation and hostile scrutiny – often accompanied by suspension or dismissal – gives rise to great professional and personal loss.

Once the individual takes that momentous decision – to do what is morally and ethically correct – their employment and promotional prospects are effectively over. Partners, wives and husbands of whistleblowers also suffer. For with the trauma of losss of career and status, there is personal psychological distress and damage to relationships with significant others and even children. In some cases – my own included – whistleblowers also suffer abusive texts and emails, whispering campaigns and even physical assault.

They are typically left bewildered by their experiences of reprisal. For at every stage of our emotional, intellectual and ethical orientation, we are encouraged to do the right thing. Every narrative that society provides – whether in school, church or in popular culture – exhorts the individual to “do the right thing” when confronted by wrongdoing. But in Ireland the consequences of doing the right thing as a whistleblower are usually catastrophic. Reprisal is a symptom of a dysfunctional societal relationship with ethical and moral formation. Perhaps this is a function of Ireland’s recent and dramatic loss of faith in her institutions, both church and State. Post-Celtic Tiger, ethical and moral perspectives ought to be compulsory components of every educational module – at all levels and in all disciplines – within the State.

The proposed whistleblower protection legislation is to be welcomed. It goes some way towards compensating whistleblowers against reprisal and loss of career. It is, however, depressing to read between the lines in the legislation. The domain assumption of the draftee is that the whistleblower will inevitably, suffer some form of reprisal or stigmatisation.

It is uncacceptable, in the year that Michael D Higgins has launched his President of Ireland’s Ethics Initiative, that high-profile whistleblowers continue to suffer hostile scrutiny and ongoing harassment in their places of work. At the moment in Ireland, when you tell the truth all doors suddenly close. In such a polity, in such an ethical environment, the Republic has no future.

stigmatise whistleblowing and to challenge and change the culture of reprisal and character assassination that persists here. Perhaps our President could take a leadership role in this regard and invite Ireland’s whistleblowers –past and present– to a reception in Áras an Uachtaráin. Perhaps even institute an honours scheme for those citizens who have indeed “done the State some service”. It would be a good start.

In such circumstances, I could conceivably look my six-year-old in the eye and say to him, “Yes, whistleblowers are the good guys”.