Gardaí and Right2Water give different estimates of numbers at Dublin demonstration 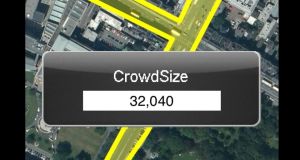 An estimate of water charge protest attendance by CrowdSize App: it uses area size to generate a figure

How many people turned up at the water charge protest in Dublin? This fact is germane to the efficiency of the whole protest. The bigger the crowd, the bigger the impact on public opinion.

As usual, the estimates varied wildly.

Protest organisers are never ones to underestimate turnout. The Right2Water campaign which organised the mass protest puts the figure at 100,000, which it says is 2 per cent of the Irish population.

Estimating crowds is a tricky business, but it is possible to bring a bit of scientific rigour to it.

At the height of the demonstration today, the crowds extended all the way down Merrion Square west and around to Lincoln Place. The overspill also filled Nassau Street as far as the National Gallery.

An app called CrowdSize has a simple way of calculating how many people attend an event.

It divides the size of the area occupied by the crowd by the average space taken up by a person standing shoulder-to-shoulder with someone else, which it calculates at 4 square feet per person.

In this case, the CrowdSize app estimated the crowd at 32,000, close to the Garda figure and much less than the organisers’ guess.