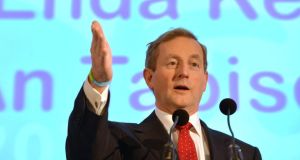 Taoiseach Enda Kenny said voters would face a clear choice in the general election between a coalition led by his party or by Sinn Féin. Photograph: Alan Betson

The Government has drawn opening lines of attack for the next election, targeting Sinn Féin over its economic policy and questioning whether Fianna Fáil would cut a deal to share power with it.

In a concerted effort to regain the political initiative after a series of setbacks over the Irish Water debacle, Fine Gael leaders said the people would face a left/right choice in the election of an administration led by it or by Sinn Féin.

Statements by Mr Kenny and Mr Noonan are seen as a response to internal grassroots pressure within Fine Gael after regional meetings at which activists said Ministers should set out the party’s achievements in office.

As Sinn Féin leader Gerry Adams responded to the Government attack by saying the election should be held straight away, figures in Fianna Fáil dismissed the attack as an effort to rally the Fine Gael base in the wake of the water debacle.

Mr Kenny said voters would face a clear choice in the general election between a coalition led by his party or by Sinn Féin.

Mr Noonan reiterated the point in broadcast interviews and at a press conference. “There’s a clear left/right choice emerging now,” he told reporters.

Claiming that Sinn Féin and the hard left would increase taxation, Mr Noonan said this was in contrast to the Government’s drive to cut tax.

“There is a big gulf between the economic policies and nowhere is that clearer than in the attitude to taxation and I was simply pointing out where the political debate is now going and what people should strategically look at,” he said.

He went on to question Fianna Fáil’s stance on coalition with Sinn Féin, saying Éamon Ó Cuív was open to the notion while others in the party took issue with Government policy in relation to controlling expenditure.

Senior Fine Gael figures say the concentration on Sinn Féin may marginalise Fianna Fáil and erode its middle class support.“Fianna Fáil aren’t saying anything that is hugely different from the Government, so they might not matter if it is between Sinn Féin and us.”

Sinn Féin also acknowledges this is a possibility, with one source suggesting the party faces a clear “ideological battle” with Fine Gael.