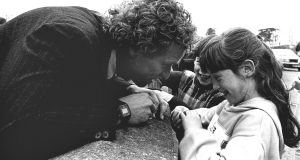 US Congressman Joe Kennedy on a visit to Northern Ireland in April 1988. Photograph: Pacemaker

The controversial visit of United States congressman Joe Kennedy to Northern Ireland in 1988 is detailed in previously confidential files released today in Belfast by the Public Record Office.

Kennedy, the 35-year-old son of assassinated presidential candidate Senator Robert Kennedy, was due to visit the North in January 1988.

A background note for the Northern Ireland secretary, Tom King, by CF Bone, a Northern Ireland Office official, noted: “Mr Kennedy is a very junior Congressman (a ‘first timer’, elected in 1980) and despite his illustrious connections, his influence should not be exaggerated.”

Nevertheless, the official felt King could usefully meet him during his planned Irish visit. He added: “The Secretary of State will recall Congressman Kennedy’s performance at the Friends of Ireland lunch in Washington on 22 September [1987].”

The file contains a report of the lunch, which was hosted in Washington by Democratic representative Brian Donnelly and attended by about 20 congressmen who were members of the Friends of Ireland. The secretary of state had used the occasion to outline political developments in the North since the Anglo-Irish Agreement.

The NIO official, who had been sitting beside the congressman, recalled that Kennedy had raised the performance of the RUC. In response, he had cited the view expressed by the SDLP leader, John Hume.

“At this, Mr Kennedy dismissed Mr Hume and his opinions. Mr Hume cut no ice with him. The only thing that was of weight to him was action which appealed – not to Nationalists on the ground in NI – but to his constituents in Boston. ”

Bone told the Northern Ireland secretary: “This was most revealing as it demonstrates the real nature of the interest of the more extreme Irish-American leaders.”

On November 24th, 1987, King wrote a long letter to the congressman citing, in particular, a statement from the British prime minister, Margaret Thatcher, “indicating that the British government will take whatever further steps are required to eliminate discrimination” in employment.

It is clear, however, that King’s letter failed to allay Kennedy’s concerns about the situation. On March 16th, 1988, on the eve of his Irish visit, Kennedy, along with several congressmen and Martin Luther King III, sent a letter to Thatcher complaining of Britain’s policies in Northern Ireland and in particular the attorney general’s decision not to prosecute any RUC officers following the Stalker-Sampson report into an alleged “shoot to kill” policy by the RUC in Co Armagh in 1982.

In the course of his three-day visit to Northern Ireland in April 1988, Kennedy became embroiled in a televised clash with a British army patrol at Divis Flats.

The official concluded that the incident had been “a heaven-sent opportunity for media propaganda” for Kennedy.

The visit ended with a dinner hosted by the Belfast-born NI minister Dr Brian Mawhinney, attended by civil servants and businessmen.

It seems to have gone better than expected. In a letter from the House of Representatives in Washington, dated April 14th, Kennedy thanked Mawhinney for sharing his time during his visit. “The problems are dramatic and the solutions aren’t easy … But I’m sincere in hoping that peace can come to Northern Ireland.”