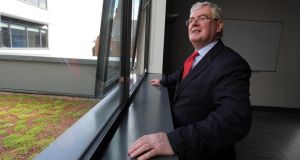 Tánaiste Eamon Gilmore bravely entered tricky waters in Cambridge at the weekend when on behalf of the Government he offered to address unionist “perceptions” that the State did not do enough to stop the activities of the IRA.

It’s a sensitive and difficult subject that doesn’t offer any obvious potential benefits for the Government but nonetheless Gilmore was explicit in saying the State would address this issue, if that is what unionists wanted. And they do.

The issue is already out there through the Smithwick Tribunal that is deliberating on allegations of Garda collusion in the 1989 murders of RUC Chief Supt Harry Breen and Supt Bob Buchanan.

For decades several unionists have alleged that the government was a “midwife” at the birth of the Provisional IRA and that it permitted a “porous Border” which republicans could easily cross to kill Protestant farmers or plant deadly bombs and then return safely to the Republic.

They use the 1970 Arms Crisis and Charlie Haughey and Neil Blaney being sacked from Fianna Fáil taoiseach Jack Lynch’s government for allegedly attempting to import arms for the fledgling Provisional IRA to bolster the argument. They also cite what DUP Minister Arlene Foster has described as IRA “ethnic cleansing” of Protestants along the Border to justify the claim that the Border was poorly policed from the southern side. Another claim is that the government and the courts went out of their way to prevent the extradition of IRA suspects to the North.

Unionist perception
Gilmore was careful to stress that he was not endorsing this perception or these arguments. He referred to the gardaí and soldiers who died or were injured combatting the IRA. He also spoke up for “successive” governments, including Fianna Fáil administrations, who acted to resist the republican threat.

His offer was timely and interesting however. He made it ahead of next Monday’s all-party talks chaired by president George Bush’s former envoy to Northern Ireland, Dr Richard Haass. His task is to help devise a blueprint to resolve the great issues of parades, flags and the past.

Where Mr Gilmore made the overture was also significant. It was at the British-Irish Association conference in Cambridge on Saturday night. For more than 40 years now on an annual basis, in Cambridge or Oxford, the organisation has been bringing together gatherings of politicians, historians, academics, clergy, community workers and journalists to discuss the political process in the North.

British and Irish ministerial speeches are reported but all other discussions are under the Chatham House confidentiality rule designed to accommodate “frank and open” talks. Senior unionist politicians heard his offer on Saturday and appeared to be impressed.

Whether northern nationalists and Irish politicians have any misgivings about his initiative will become clearer in the time ahead.

Gilmore’s speech was well written, carefully crafted and powerfully spoken. It contrasted hugely with what some viewed as a “cut and paste” script delivered by Northern Secretary Theresa Villiers at the conference on Friday night.

Fraught situation
With the political situation again rather fraught in Northern Ireland, the Tánaiste majored on how the British governments must remain co-guarantors of the Belfast Agreement – no taking the Dublin-London eye off the ball.

We also got an insight into how the Government might try to manage the 2016 centenary commemoration of the Easter Rising. The invitation to the British royal family, members of the British government and unionist politicians to be part of the commemoration shows people are thinking creatively in foreign affairs.

But it was his comment on the past that jumped out. It brings the Government within the ambit of those Haass talks because that unionist perception is very much part of the past. Gilmore, in a separate interview with The Irish Times in Cambridge, said he was happy this should be the case.

It seemed to indicate that there may be method to his move. If the Government is prepared, so to speak, to ’fess up to failures in the past – if there are failures to ’fess up to, as Gilmore would stress – that puts pressure on the IRA, loyalist paramilitaries, British government, British army, the police and MI5 to be equally forthright. You wouldn’t count on that happening but at the very least Gilmore’s offer brings momentum to the Haass talks.