The politics of Twitter: Drama as Kenny unleashes #ge16

When Enda Kenny uses Twitter video to tell us election date, he is controlling his own message

An Taoiseach Enda Kenny releases a video asking for public support as he confirms a general election. 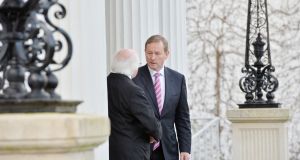 Taoiseach Enda Kenny with President Michael D Higgins at Áras an Uachtaráin for the dissolution of the 31st Dáil in advance of General Election 2016, on February 3rd, 2016. Photograph: Alan Betson/The Irish Times

Did Taoiseach Enda Kenny show a lack of courtesy to the Dáil this morning by announcing the date of the election via a Twitter post and video, rather than in the House?

Some noses were out of joint at the brusque delivery to TDs, as opposed to the stentorian “address to the nation” tone of the video.

Others grumbled that, by limiting his words to the minority of the population who actually use Twitter, the Taoiseach was somehow being elitist, and ignoring the hundreds of thousands of ordinary Irishmen and women who had their ears glued to the wireless in expectation of the exciting details.

This almost certainly overestimates the level of excitement in the first place, not to mention the fact that radio stations, TV channels and news websites could rebroadcast the message within seconds of it being posted.

So what, if anything, does this small event tell us about how the campaign is likely to be handled by political parties in the next three weeks?

First, don’t underestimate the attraction to politicians of “disintermediation”, the ability to communicate directly with audiences without having to rely on broadcasters and newspapers.

You can choose the time and terms of engagement of your policy statement, without any awkward questions or rebuttals. You can move fast, and you can attempt to create a bit of suspense and drama.

Of course, it’s one thing to attempt to do these things, but quite another to do them successfully.

If the 42,000 Twitter followers of @EndaKennyTD were hoping for wit, wisdom and insights into what it’s like to run the best small country in the world in which to do business, they must be sorely disappointed by now.

The “keep the recovery going” mantra is repeated ad infinitum. There are anodyne PR statements about job creation. Maybe Enda is writing this stuff himself, but it certainly doesn’t look like it.

He (or his minions) never seem to respond to questions or queries from other people on Twitter. This might appear to be missing the point of social media networks, which supposedly facilitate conversations and interactions rather than just broadcasting monologues.

The reality, though, is that over the years, for public figures and celebrities, Twitter has become a sort of broadcast channel in its own right.

If you’re Taylor Swift, you can’t and don’t interact with your 70 million followers - you just keep them happy with manufactured gossip and selfies.

The Taoiseach and most other Irish politicians are trying to do the same thing - they’re just no good at it. (The arguable exception is Gerry Adams, whose surreal and slightly disturbing tweets have won him a certain following.)

There’s an obvious disconnect between what actually works on Twitter – spontaneity, authenticity, humour, immediacy – and these hyper-cautious PR messages.

But perhaps the party handlers have come to the conclusion that the perils of Twitter outweigh the prizes. The perils are well-known – the funny typo that goes viral, the irritated response that becomes a media storm, the unfortunate decision to say something – anything – when alcohol has been consumed.

The fact is Twitter is not the battleground on which this election will be won.

When a Labour Party strategist told me a few weeks ago that “there are no floating voters on Twitter”, he didn’t mean that literally – clearly there are plenty of them there, as elsewhere.

But the way in which Twitter works means that you’ll find it much harder to reach those floating voters there than on other networks.

Twitter in this election will be for rallying the party faithful, getting your digs in early and rapidly amplifying breaking stories that suit your particular agenda.