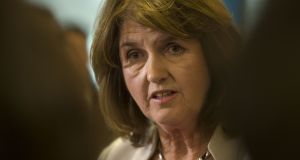 A planned debate in Irish between the party leaders was cancelled due to the lack of fluency of both Labour leader Joan Burton and Sinn Féin president Gerry Adams. Photograph: Dara Mac Dónaill/The Irish Times

The planned party leaders’ debate ‘as Gaeilge’ on TG4 has been abandoned because it was impossible to accommodate the weaker spoken Irish of Joan Burton of Labour and Gerry Adams of Sinn Féin.

The broadcaster had originally pitched for a four-way debate with Taoiseach Enda Kenny, Fianna Fáil leader Micheál Martin, as well as Ms Burton and Ms Adams.

However, the proposal ran to ground after Labour offered Minister of State Aodhán Ó Ríordáin, a fluent speaker, as a substitute, and Sinn Féin suggested Pearse Doherty, a native speaker from Gweedore in the Donegal Gaeltacht.

The proposal was not acceptable to Fianna Fáil which argued that a leaders’ debate should be confined to leaders alone.

As an alternative the party suggest a two-way debate between Mr Martin and Mr Kenny.

Fine Gael said the Taoiseach had always been amenable to a four-way, or to a seven-way debate. A spokeswoman said yesterday that when TG4 said that neither was possible, no other alternative was put forward by the broadcaster.

Sources in TG4 said the outcome was disappointing but it was the only realistic option it had, once two parties suggested substitutes.

A spokesman for Fianna Fáil said that was either a leaders’ debate or not and it would not worked as substitutes were being proposed by Labour and Sinn Féin.

The spokesman said that Mr Martin was willing to participate in a two-way leaders debater but that seemingly was not acceptable to Fine Gael.

For its part, the Fine Gael spokeswoman said the two formats the party had suggested involved four leaders or seven leaders. She said when that was not possible no other proposals were put to the party.

In 2011, in what might transpire to be a unique moment in Irish politics, the leaders of the three major parties took part in a full debate in Irish on TG4. It involved Mr Kenny, Mr Martin and the then leader of the labour Party Eamon Gilmore.

The quality of the debate and the exchanges were widely praised at the time.