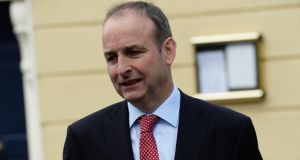 “I think the Taoiseach is ignoring the North and is not giving it the degree of detailed attention that he should,”says Fianna Fáil leader Micheál Martin. Photograph: Cyril Byrne

He criticised the Taoiseach’s failure to attend the recent investment conference in the North and said there was no participation from the South in that conference.

He warned that unless Mr Kenny started to give the North the focus it deserved, “the consequences may be much greater than we already fear”.

He said: “I think the Taoiseach is ignoring the North and is not giving it the degree of detailed attention that he should.”

During the event, attended by about 150 people, Mr Martin said that at last year’s ceremony he spoke about the Government walking away from the peace process. Major opportunities were being missed and there could be dangerous setbacks, he said.

Sectarian disputes
In the past 12 months “there has been a growing sense of crisis in Northern Ireland. Sectarian disputes are on the rise and public faith in the institutions of the Good Friday agreement has collapsed.

“The Assembly and executive are dominated by the squabbles of the DUP and Sinn Féin as they focus on their own party interests.”

What was missing was any serious engagement by either the Dublin or London governments. “They have been complacent and disinterested.”

It was “particularly damaging” how the entire issue of development through North/South co-operation had been ignored.

“This is how you end up with Sinn Féin and the DUP going to Downing Street to launch a development plan for Northern Ireland which makes no mention of the Republic.”