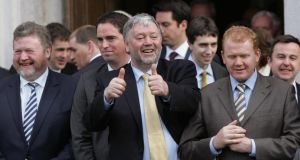 Fine Gael TD Noel Coonan (centre) give a thumbs up to photographers on the of the 31st Dáil in Leinster House in 2011. He has claimed the State is facing “what is potentially an Isis situation” if anti-water charge protesters are allowed to continue with their demonstrations. Photograph: Matt Kavanagh/The Irish Times.

Fine Gael TD Noel Coonan has received a death threat following his comments comparing the behaviour of anti-water charge protestors to that of the Islamic State jihadist rebel group.

Mr Coonan told the Dáil the State was facing “what is potentially an Isis situation” if anti-water charge protesters were allowed to continue with their demonstrations.

Speaking in the Dáil on a motion on water sector reforms, the Tipperary North deputy said some of the protesters in Dublin wanted to “act like parasites” and “live off country people” who had paid for their water over the years.

Mr Coonan described the scene last weekend when Tánaiste Joan Burton was trapped in her car by protesters for more than two hours as “disgraceful”.

“People were horrified by the protests and this has been an awakening call for them.”

The Government backbencher was speaking in the Dáil during the two-day debate on water charges.

He said recent behaviour during “socialist-led” protests had “turned the tide for people” and that there was a need for the demonstrations to be nipped in the bud.

Socialist Party TD Paul Murphy has been criticised for his role in a protest at the weekend in which Tánaiste Joan Burton was trapped in her car in Jobstown in Dublin for more than two hours.

Mr Murphy has insisted the protest was peaceful and rejected a call from Taoiseach Enda Kenny to apologise to Ms Burton. Protesters have criticised gardaí for taking a heavy handed approach to policing the protests.

Mr Coonan said: “The people of Ireland have now seen what they are facing particularly with the socialist-led protests that were there.

He said the people in Templemore in Co Tipperary, where he lives, and across the country were “horrified by what’s going on”.

“I think that it has been an awakening call for them because they are now concerned about elements of socialists, the so called wealthy Socialist Party led by the Murph (Paul Murphy) and company and aided and abetted by extremists within our colleagues here from Sinn Féin,” he said.

“The people have given that signal now to us ‘nip that in the bud’, if not we are facing what is potentially an Isis situation in the Middle East if those people are allowed get on to do what they’re doing. God help this country and people realise that.”

Mr Murphy later defended himself in the Dáil. He said the Taoiseach had called him a kidnapper, the Tánaiste dubbed him a ringleader and now “Fine Gael backbenchers are calling me an Isis militant”.

The Dublin South West TD described the comments as “hysterical overreaction”, which were offensive to the victims of Isis.

Islamic State, or Isis, is an extremist, jihadist rebel group that has taken control of territory in Iraq and Syria with a view to creating an Islamic caliphate. It has been criticised for its brutality and has published a number of videos online of Western hostages being beheaded.

Mr Coonan’s party colleague Catherine Byrne said she was disappointed to see Mr Murphy “claim with a grin on his face, that he had arranged an agreement with the protestors to let the Tánaiste go”.

“What a pathetic way to begin one’s career in politics” she said, adding: “This is not the Middle East. We live in a democratic society.”

The Dublin South-Central TD staunchly defended the role of gardaí.

In an impassioned speech, Ms Byrne, whose son is a member of the force, said she wanted to talk about the mothers, fathers, wives, husbands, children and grandchildren of those who “proudly wear the blue uniform of An Garda Síochána”.

She said her son’s one thought when he put on his uniform every day was “to uphold the law and protect people living in communities”.

She said to the Opposition: “How would you like your son or daughter to be spat at, kicked in the shins and verbally abused? I have never heard such abuse before and it is wrong.”

The Government yesterday announced a revised package of water charges following a series of protests across the State in recent weeks.